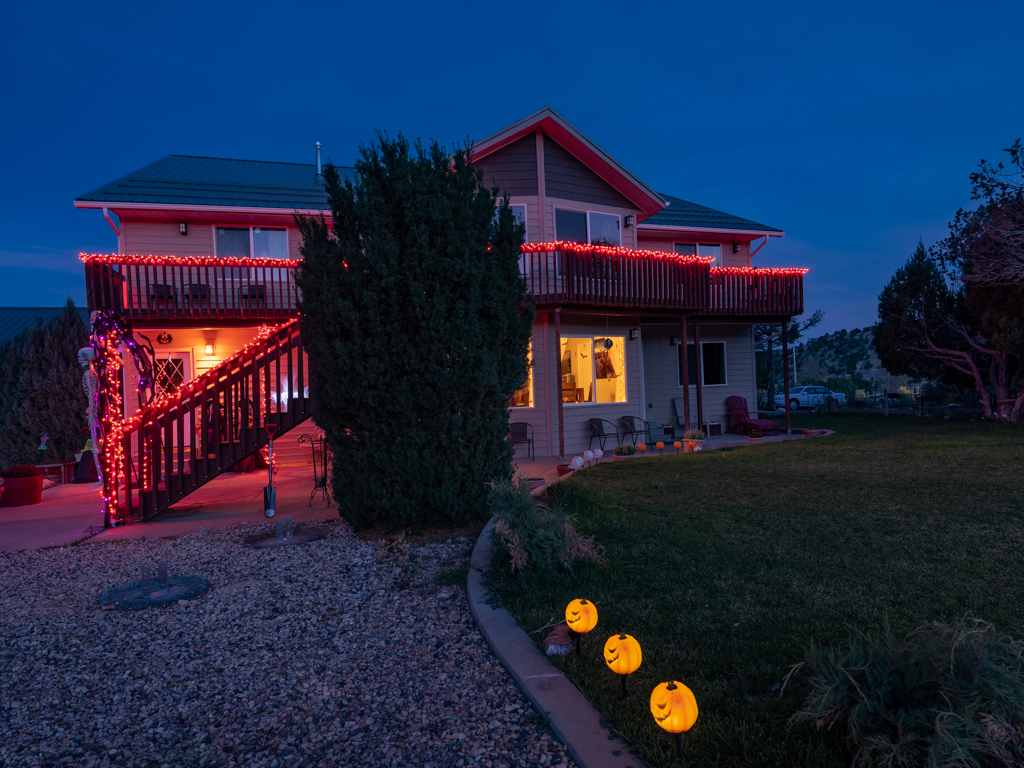 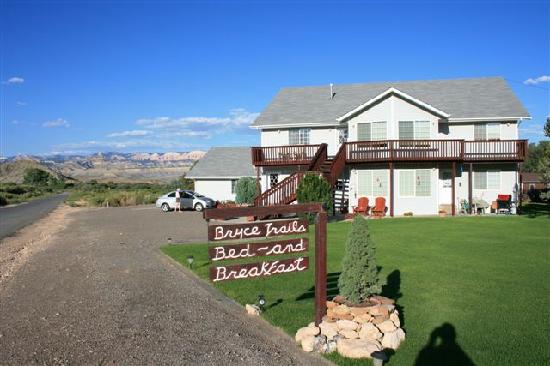 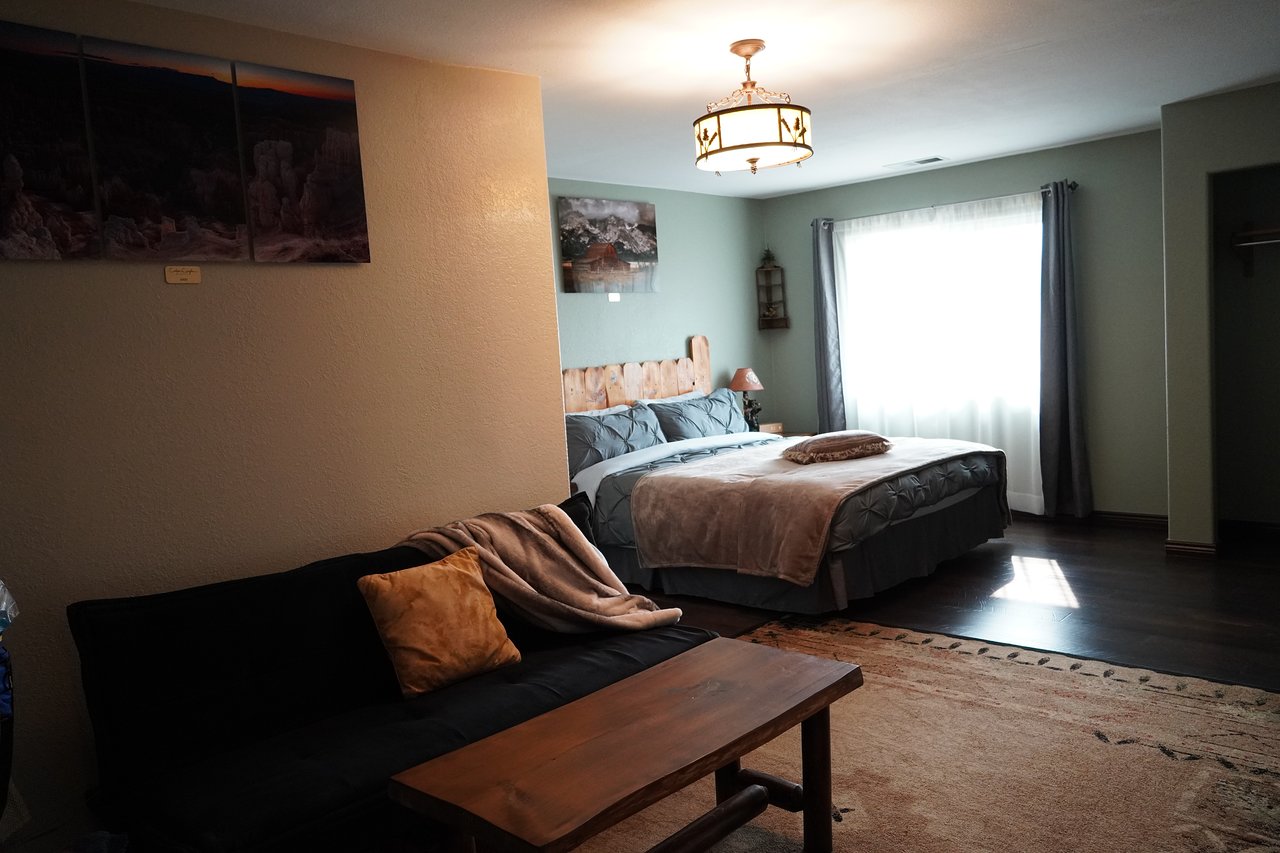 Bryce Trails Bed and Breakfast is a place of lodging that can be found near Bryce Canyon National Park and on the edge of the city of Tropic, Utah. There are a total of six rooms available. Many people who reserve a room at the bed and breakfast are in the area for activities such as exploring Bryce Canyon, hiking some of the many trails in the vicinity, and riding ATVs around the outskirts of the town. Bryce Trails Bed and Breakfast is open year-round and, according to the owner, some of the best times to visit Tropic, Utah, are during the spring and fall, specifically around the months of May and September. The owner is also a landscape photographer and offers an online package where he can give guests a one-on-one lesson in photography.

Bryce Trails Bed and Breakfast consists of a two-story building with guestrooms on each floor. There is a dining room, which is where breakfast is typically served, and an outdoor porch with seating for guest's to use. Recently added to the parking lot is a 48 amp charger for electric cars, which can be made available when patrons make a note on their reservations that they will need one ahead of time.

The available units are named Queens Garden, Fairy Land, Navajo Loop, Bristle Cone Pine, Mossy Cave, and Under The Rim, which is a suite and offers the most significant amount of space. Every room is uniquely decorated to its own theme, often in reference to its name. Regardless of which room a guest decides to reserve for their trip, each room comes equipped with a mini-fridge, television with Netflix and Hulu, a coffee maker, access to WiFi, and basic toiletry needs such as soap and shampoo. Size varies between each room as well as the size of the bed. Some units have a queen-sized bed, while others have a king-sized bed.

Breakfast at Bryce Trails Bed and Breakfast is something that Ed, the owner and typically the one who makes breakfast, tries to make as good as possible. All of the dishes are made from scratch, and some of the ingredients that are used are locally sourced. Eggs are commonly made, as the property owns their own chickens, which reside in the backyard. Ed is able to make a variety of dishes for his patrons, including things like eggs Benedict, rancheros huevos, baked omelets, and more. Ed explains that he also does his best to make accommodations for those with food allergies, as long as he has the ingredients and enough time to make a substitute meal.

Within the city of Tropic, there are a number of restaurants that guests can travel to for food while they are staying at Bryce Trails Bed and Breakfast. The owner enjoys telling visitors about his favorite places to eat. On the list of recommendations that he likes to share is I.D.K. Barbecue. I.D.K. Barbecue serves a variety of barbecued goods and offers outdoor seating on picnic tables just outside of the building. Another eatery he may tell patrons about is called Pizza Place, which specializes in serving pizzas, pasta, and desserts.

Ed, the owner of Bryce Trails Bed and Breakfast, explains that he wants those who stay at his establishment to feel comfortable in their rooms. He would like them to be recharged from the previous day and be ready for the activities they have planned the next day. Ed mentions that one thing that he enjoys about the job is meeting the people who make reservations at his bed and breakfast.

A good portion of guests ends up arriving later than usual, prompting the owner to create a process where the patrons can check themselves in no matter how late they show up. This allows guests that are spending time in Bryce Canyon National Park and other places to show up whenever they are able. Due to the fact that guests are able to show up as late as they need, there is no quiet time, though the owner does ask that visitors show each other mutual respect and keep the noise to a minimum. There is a strict policy against pets, as they have no way to accommodate them.

The best season of operation tends to be during the months of May and September. Visitors who arrive during these times of the year tend to miss the cold of winter and may avoid the heat of summer. This is also the time when leaves on the trees typically begin changing colors, and the flowers tend to bloom. The typical demographic of people who come to Bryce Trails Bed and Breakfast are those who are retired and people that are in the area for Bryce Canyon National Park and other places for hiking. ATV riding is another popular activity that guests can take part in. According to the owner, "about 95% of people that come up here are here for Bryce Canyon to hike and take pictures." He also mentions that the business has had many guests come back after having stayed with them before.

At Bryce Canyon, there are many hiking trails and places to go horseback riding, stargazing, and driving ATVs. Due to this, Ed, the owner, prioritizes helping guests have a relaxing time after a day of outdoor activities. One person who stayed at Bryce Trails Bed and Breakfast mentions in a review, "We rested super well during all of our stay, which is super important when you are traveling and hiking all day long." Breakfast is another staple for the business and something that Ed strives to make a good experience for everyone. Another person who stayed at the bed and breakfast wrote, "The breakfast, served in a dining room, was ample and delicious."

Bryce Trails Bed and Breakfast was first established in 2016. Ed is both the current owner and the original owner of the bed and breakfast. According to Ed, the house that he currently uses was erected in 1996, and ever since construction on the building finished, it has been tailored towards being a bed and breakfast. It wasn't until 2016 when the purchase was made, that it began being used for what it was first intended. While Ed was in college, he came up to Bryce Canyon for photography. Later, when he invested in the property, he decided to open it up to other people that wanted to come up to Bryce Canyon National Park as well.

Once he became the owner of the land that would become Bryce Trails Bed and Breakfast, he set about remodeling the interior and making it suitable for people to stay in while they are traveling. New floors have been put in, and he has acquired new furniture for the living spaces and dining room. He plans on adding a new building, giving future guests more options when it comes to living arrangements. The area he plans to build on one day has had some recent landscaping done on it in preparation for the new building.