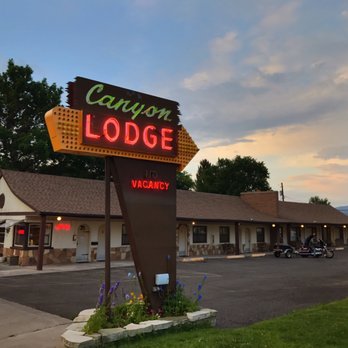 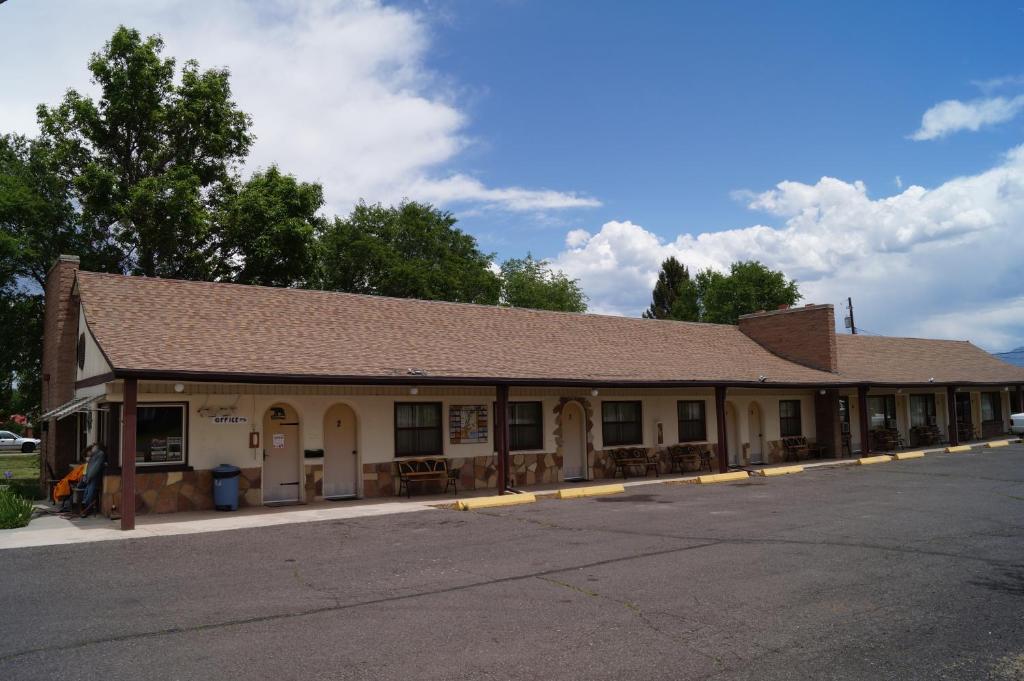 The Canyon Lodge Motel is located in Panguitch, Utah. It is a small motel that is open during all times of the year and offers nine rooms in total, with additional rooms currently under renovation. It was first constructed in the 1950s, hinting at its age by the way the rooms are designed and decorated, and serves as a convenient lodging source for those who are planning to visit some of the nearby places of interest like Bryce Canyon National Park. The area that surrounds the town of Panguitch tends to be populated mostly with trees and mountains, with a few other national forests and parks close by.

The Canyon Lodge Motel is a one-story building with traditional roofing and rocky decorations on its exterior walls. Of the ten rooms which are typically available at the motel, only nine are currently open for reservations as they finish renovations on the tenth unit. The rooms are not decorated with any specific style, other than being up to date and of a "twenty-first century" feel. Most of the rooms are defined as "budget-friendly," and most of the units are able to accommodate more than two people, allowing for traveling families only to require one room. General amenities of the rooms include WiFi, cable television, mini-fridges, microwaves, coffee-makers, alarm clocks, heating, and air conditioning. Additionally, guests are free to roam the property, which consists of roughly one acre. There is a large lawn available for recreation and cinderblock walls to provide privacy from the neighboring buildings.

The Canyon Lodge Motel is located about a block away from downtown Panguitch, which is in southern Utah. There are a handful of restaurants and small shops within walking distance of the property, including the Cowboy Smokehouse, Big Fish Family Restaurant, and C Stop Pizza. "The motel rests on the corner of Main Street and 200 N, meaning that the building isn't "squished on either side," as described by the owner, Lisa. Though there are parking spots in front of each room, the motel's corner location allows for guests to park on 200 N as well.

One of the biggest goals for the Canyon Lodge Motel is to provide rooms that do not stimulate allergies of any kind from their guests. As such, they ask that visitors refrain from smoking in their rooms. The porch area outside of each room is a designated smoking zone, and ashtrays are available upon request. To further add to their no-allergy policy, pets of any kind are strictly prohibited at Canyon Lodge Motel. The property is open year-round, with their defined "busy season" ranging from April to October. Lisa notes that May, June, August, and September are their busiest months in a typical year. Prices fluctuate and change between the off-season and the busy season. Breakfast is not served at Canyon Lodge Motel.

The desired culture at the Canyon Lodge Motel is that of a "home away from home," according to the owner Lisa. The motel doesn't strive to create the same experiences as a larger hotel franchise, instead choosing to focus on the family-oriented aspects of their property. The property has been family run and operated since 2012, though coincidentally, the original owners of the property back in the 1950s are ancestors of current part-owner Benji. Canyon Lodge Motel attempts to cultivate that same family-togetherness when it comes to their guests, providing accommodations for entire families and placing them in a safe neighborhood.

The typical demographic of guests ranges both in age and in ethnicity. Many Europeans and Chinese visitors have come to experience Bryce Canyon National Park, often in large droves of people. Lisa guesses that around one-third of the guests at the motel are families, whereas the remaining two-thirds are split between couples and groups of friends. The older people who have visited the property have expressed their pleasure with the lack of stairs, seeing as how the entire property is only one story.

Other guests speak of the comfortable nature of the beds and the property's cleanliness despite its age. One guest said, "We stayed here for visit to the Bryce National Park. The park is only like 50 minutes away from this hotel so the rates are pretty reasonable if you're staying here and plan to visit the park. Just remember that the rooms are really small but they are super clean at the same time." One of the elements of the motel which draws in a surprising number of visitors is the fact that half of the room doors have circular tops, giving the building a more "retro" style.

Canyon Lodge Motel was originally constructed in the 1950s. At the time, the motel was only half of its current size. Rounded doors were part of the initial construction, but when additional rooms were added in the 1960s, the doors were a more traditional square cut. In the year 2012, the Canyon Lodge Motel was purchased by Benji and Lisa. They have since traced Benji's family line back to the people who first built the motel. There are a number of pictures on display that visitors can see regarding the history of the property and compare it to what it once was to what it has become since then. Currently, renovations are being made in some of the rooms to further bring them to twenty-first-century conditions.