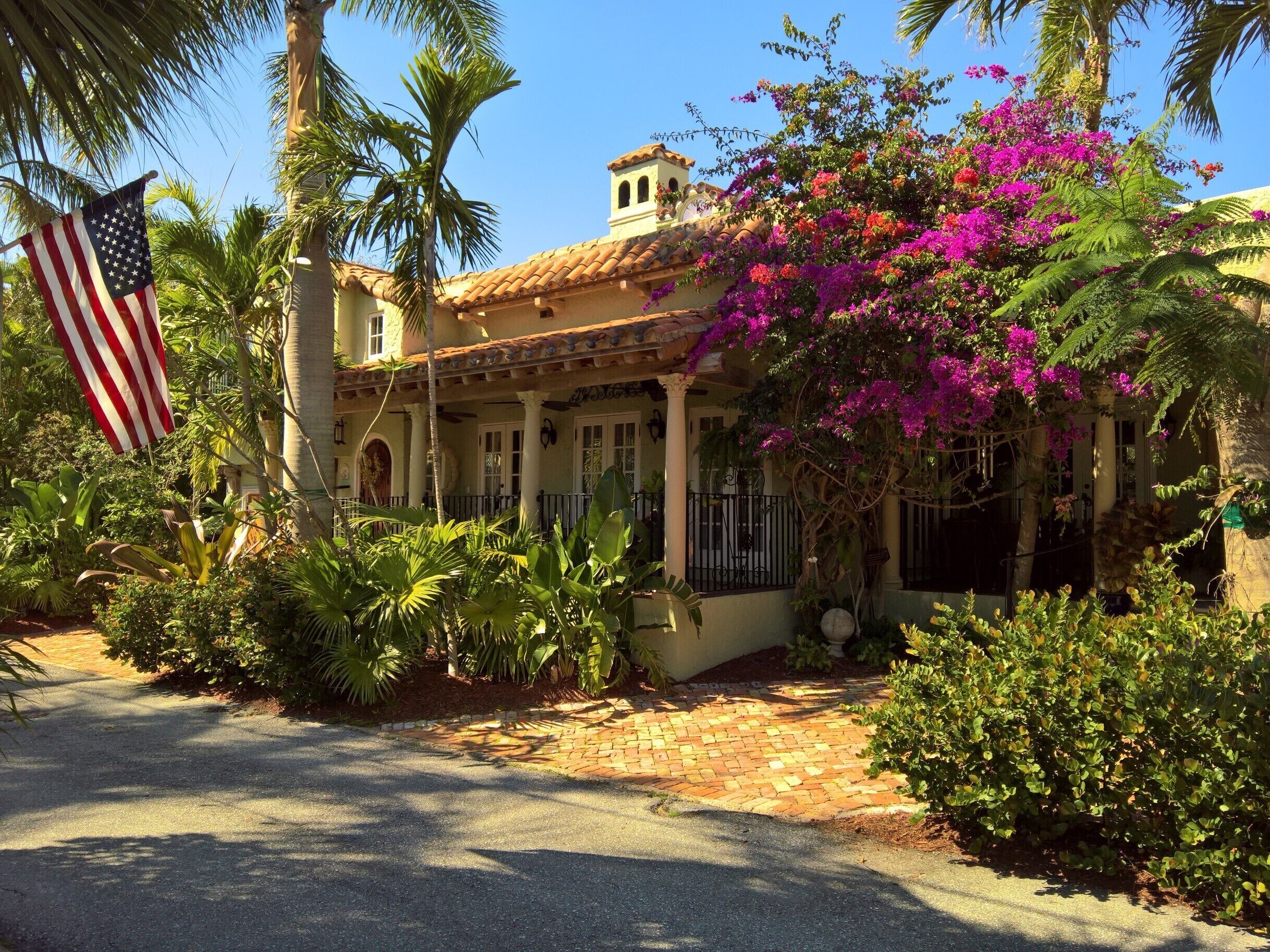 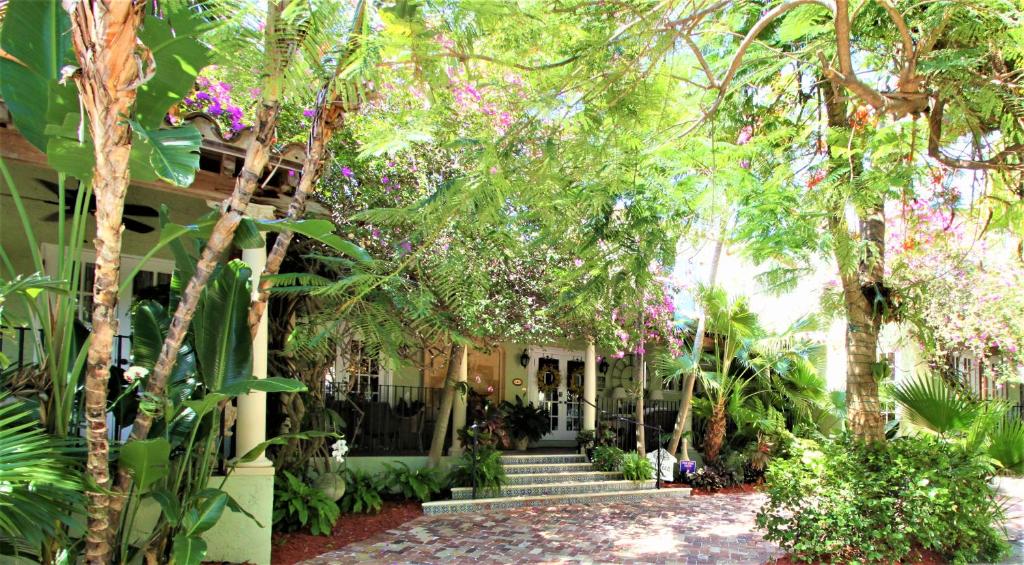 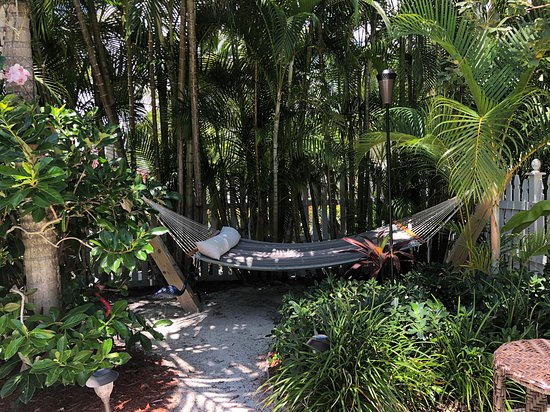 The Casa Grandview Bed and Breakfast is a multiple-building property that lies at the intersection of Georgia St. and New York St. The city it resides in is West Palm Beach on the southern end of Florida. The Casa Grandview Bed and Breakfast's owner manages five different buildings right next to the bed and breakfast, including a vacation rental for guests who want to stay for a more extended period of time. The building that makes up the bed and breakfast is actually two houses that have been joined together; these houses were built in the early 1900s and were purchased by the previous owner for only one dollar each. The Casa Grandview Bed and Breakfast has no pet-friendly rooms. However, there are two pet-friendly spaces among the vacation rentals for guests that would like to bring their pets.

The Casa Grandview Bed and Breakfast has five suites available to the public, and in the buildings next to it, there are another eight vacation rentals. All of the rooms are uniquely decorated and vary in size. Regardless of whether the guest rents out a vacation rental or a bed and breakfast suite, all of the rooms have outdoor sitting and dining areas with tables and chairs made of custom aluminum and a private bathroom. A red umbrella accompanies all of the outdoor decks and a number of the dining tables. The bed and breakfast suites recently had electric tea kettles added to the rooms, as well as new mini-fridges in a few of them. The rooms have a ceiling fan, an iron and ironing board, a hairdryer, a Roku television, a toaster, and access to Wi-Fi. The vacation rentals have a majority of the same things that the suites have, although they tend to be much larger in size. They also come with a fully equipped kitchen, a welcome basket, a blender, and beach towels.

Breakfast is prepared each morning and finished between 9:00 and 9:30. Then it is placed in recyclable boxes and delivered to the rooms—or if told in advance, the pool. The dishes which are prepared for breakfast tend to vary every morning, and property management tends to be flexible with what they can make. Typically, the process begins with the owner making a trip to the local baker to purchase an assortment of bread. The kind of bread they get depends on the dishes they are making for that day, but there have been baguettes, pastries, croissants, nut-bread, raisin bread, and more. They pick up the bread fresh and add it to the dishes they usually make for main courses like ham and cheese croissants, avocado toast, eggs benedict, and others. Beverages for breakfast include juice, coffee, and tea. Regardless of what is made, they try to come up with healthier options for their guests. They are also able to make accommodations for people with allergies or dietary needs.

On the outside of The Casa Grandview Bed and Breakfast, there are a number of places that guests can explore while still remaining on the property. One of the more significant highlights to many of the patrons is the outdoor swimming pool. The pool is surrounded by a number of red umbrellas, a purposeful theme upheld on the property, as well as several tables and chairs for guests to use while they are spending time outside. A number of gardens surround the property, as landscaping is taken rather seriously at The Casa Grandview Bed and Breakfast.

Beyond the property line, there are a wide variety of places that guests can visit during their stay at The Casa Grandview Bed and Breakfast. The owner likes to recommend several restaurants to her guests if they would like some advice on where to eat in the area. Table 26 is a fine-dining restaurant that serves a number of comfort dishes from all over the world. Another restaurant that she likes to mention to her guests is called Grato. Grato is a mix of casual and elegant dining that specializes in Italian cuisine.

Guests that are looking for a place to find entertainment can find a number of things to do within the area. Cheryl recommends The Norton Museum of Art, which is only three blocks away to the east of The Casa Grandview Bed and Breakfast. All kinds of sculptures and paintings from local and famous artists are on display for visitors to enjoy. Howard Park has a community center and large areas of grass for outdoor recreational activities. Guests that visit sometime in January may be able to catch the South Florida Fair that is celebrated each year annually. There are also a number of theaters that put on shows and performances at various times of the year. The beaches are close as well, only a few minutes drive away, which allows guests to spend time doing recreational water activities.

The owner of The Casa Grandview Bed and Breakfast, whose name is Cheryl, explains that the goal of the property is to create an environment that is clean and comfortable for the visitors and one that allows the guests "to feel the stress leave them." She elaborates and says that they do what they can to be the best that they can be. Rather than compete with other bed and breakfasts in the area, they compete with themselves in an attempt to never stop improving. The staff tries to be customer-oriented, and they are always asking them for feedback and if there is anything they need. They do their best to make it a pleasant stay for everyone, even if they are only staying for one night.

There are also a number of policies put in place to help maintain a good atmosphere and clean environment. One significant policy that is enforced is that there are only two rooms available that are pet-friendly. Unless a guest has one of the pet-friendly rooms, pets of any kind should not be inside the rooms. A fee of 150 dollars may be charged to the visitor if they are caught bringing a pet into a non-designated room. The owner also asks that guests maintain an air of quietness during the later nightly hours. Smoking is prohibited on the property and has a fee attached to anyone that does. One more policy in place is that children are not allowed in the rooms to help keep damage to the property to a minimum.

The Casa Grandview Bed and Breakfast has received a number of reviews in the past from previous patrons. Many of these reviews mention the quality of care that was provided by the staff. One review reads, "This property is a gem. The best location for sure, and the staff is amazing." Breakfast is another highlight that is mentioned in the reviews. Another person that stayed at the bed and breakfast wrote, "Breakfast is great, and they will make you almost anything as long as they have the ingredients."

The building that makes up The Casa Grandview Bed and Breakfast is actually comprised of two historical buildings that were once homes. The first home was built in 1919, just over one hundred years ago, and the second home finished construction about six years later in 1925. Surprisingly, they were not built at the current location where they stand. These two buildings were originally created a few miles away from the property and were under threat of being torn down to make room for other facilities. People of the area got together, including the owner, and petitioned the local government not to destroy the old buildings. The local government agreed and instead put them up for sale. The homes were purchased for one dollar each. Then they were moved to this location, and a large number of renovations took place. While it was only one dollar to purchase each house, the cost of moving the houses was close to 50,000 dollars per house.

When the Casa Grandview Bed and Breakfast owner purchased the buildings, they were not being used as a bed and breakfast. However, a little while later, after hearing some feedback from her customers about how they wanted a place to stay for shorter periods of time than the vacation rentals allowed—she turned the old houses into a bed and breakfast.

Cheryl is the original owner of The Casa Grandview Bed and Breakfast and has owned it for about 17 years. It opened for the first time around 2004 and has been running ever since. A number of changes have been made over the years, including replacing the toilets with ADA compliant toilets, adding new driveways, purchasing new furniture, putting in new beds, and repainting the interior walls.