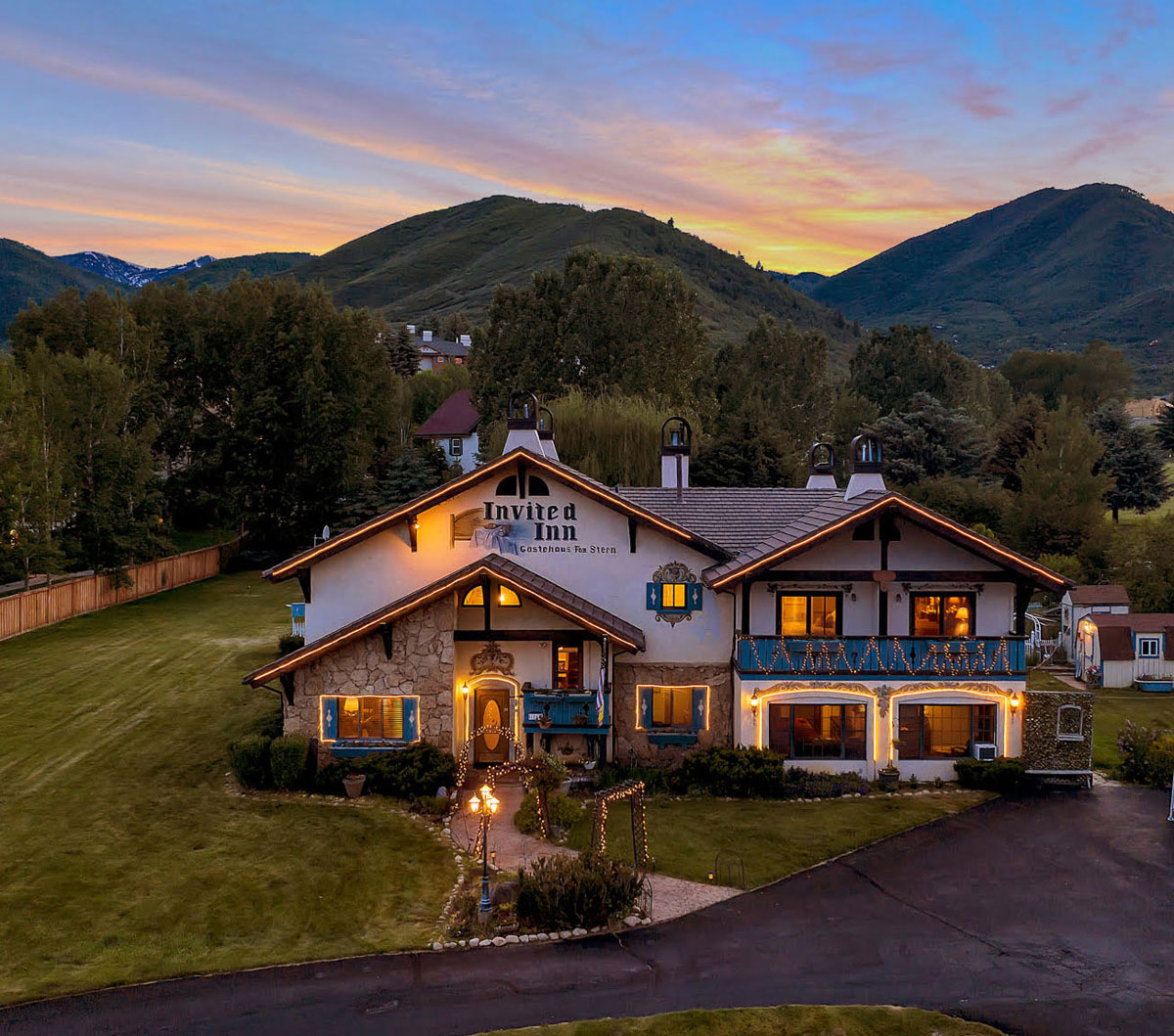 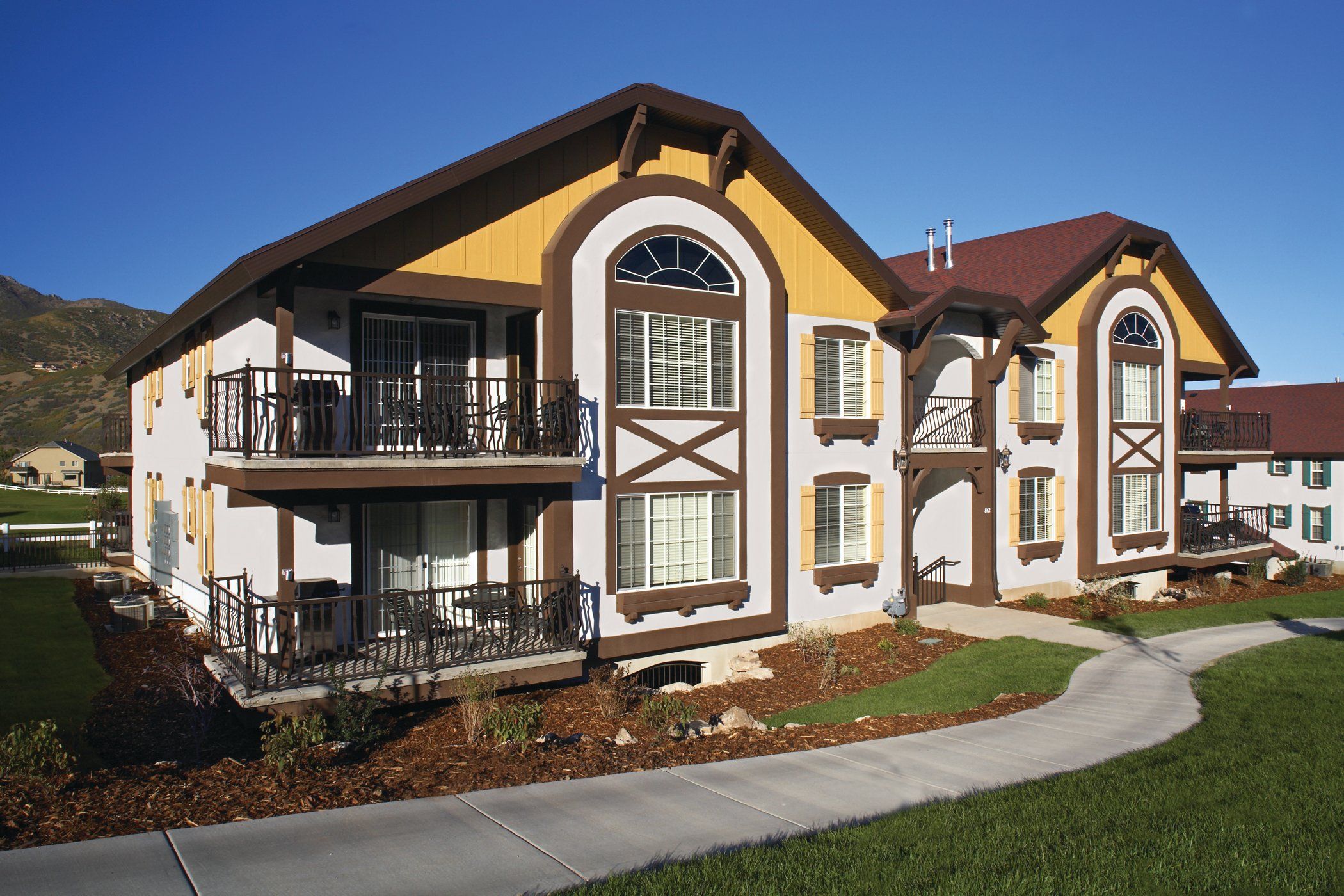 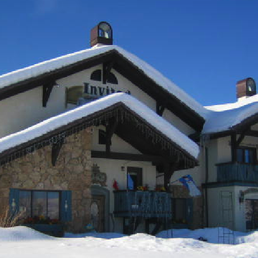 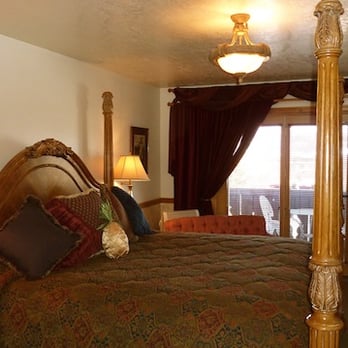 Invited Inn Bed and Breakfast is located in a Swiss-inspired town know as Midway, Utah. The building itself is styled after Swiss architecture that aids in preserving the history of the town. The building was built in 1986, is currently owned by Bill and Susie, and is run as a bed and breakfast. The inn is exclusively for anyone who is over the age of 18. Additionally, it should be noted that the property is not ADA compliant. The establishment is open year-round and is generally busy all year except for the months of November and April when business tends to slow down. The property is located near many outdoor activities, including many hiking trails, water activities on Deer Creek Reservoir, and biking trails. The owners say that one of the biggest draws to their inn is the Wasatch Mountain State Park and the romantic atmosphere that they try to provide.

Invited Inn Bed and Breakfast, located in Midway, Utah, serves most commonly as a romantic getaway or recreational destination for many people. The building was originally built in 1986 and now sits on 1.08 acres, with the building being about 4,500 square feet. The current owners are Bill and Susi, who have been running the inn since 2002. During the 20 years of their ownership, the inn has gone through a 4-year remolding phase, resulting in more unique amenities such as spa features in each individual bathroom. The owners preserved the Swiss-style architect of the home through the remodeling stage, and it continues to fit in with the Swiss-inspired town of Midway.

The building is a two-story Swiss-style home with dark exposed wood accents adorning the tan building with accents that strive to emulate Switzerland. The home is located between mountain ranges, providing views of the mountains on the front and back of the building. Additionally, the property has a small garden in the front with some surrounding trees and vegetation adorning the property. While staying at Invited Inn Bed and Breakfast, guests have the option to enjoy outdoor activities provided in their stay. The activities that guests have options to choose from including basketball, croquet, badminton as well as other lawn games. Outside, patrons also have access to two gazebos, lawn furniture for lounging, and a willow tree that has a swing attached to it.

The bed and breakfast holds five rooms available for visitors to book, all of which are located on the second floor of the building. The names of the five units are the Old World (premium king), Western (premium queen), Woodland (premium queen), Victorian (premium queen), and An Exotic Oasis (deluxe queen). The most popular units include the Woodland and Old World Rooms, whose popularity can be attributed in part to the desired romantic emphasis of the rooms and because the Old World is the only room with a king-sized bed. Four of these five rooms include spa-like features, including dry saunas, double occupancy whirlpool tubs, and private balconies, An Exotic Oasis Room is the only one of the units without these amenities. All the rooms include amenities such as steam showers, towel warmers, featherbeds, fireplace, down comforters, clock radios, hairdryers, and bathrobes/slippers. Each room has the option for a TV monitor and DVD player to be placed inside of it. In addition, guests may purchase popcorn and soft drinks for a small additional charge.

The first floor of the building is the common area, which includes the Breakfast Parlor, Sun, and Living Rooms. Any room is accessible by patrons, except the kitchen, where only the owners are allowed in. Breakfast is included in the stay and cooked fresh every day by the owners. The option is provided for visitors to rent a room without the breakfast if people are wishing to cut down costs while staying at Invited Inn Bed and Breakfast. Breakfast options at Invited Inn include waffles, eggs, and French toast. The inn is particularly known for its German pancakes, which are described as having a "bread bowl" appearance. Guests have said that "The breakfast in the morning made by Bill and Susi was delicious and fresh." Breakfast is currently served at 8:30 and 9:30. The owners are willing to make accommodations for those with food allergies or sensitivities if they are given an appropriately early notice by guests.

Invited Inn Bed and Breakfast is accommodating to many small functions such as family gatherings, weddings, and quilting clubs. The owners are dedicated to making guests feel invited into their home. More specifically, Susi says she wants guests to "feel spoiled in [their] home." Their motto is "More than a stay, it's an experience." Guests have said that the stay was "amazing and comfortable. Bill and Susi go out of their way to accommodate to each guest." The owners are dedicated to being attentive to the guest as soon as they walk in by providing a tour of the building and showing them the common areas, the guest rooms, and how to work the amenities. Susi, one of the owners, says she is positive that their inn is most likely "the only one of its kind because of the amenities their inn offers. It's like having your own personal spa in your bedroom."

Children are also not allowed to lodge at Invited Inn Bed and Breakfast because of the liability caused by the spa features found in the bathrooms and to also provide the inn's focus on romantic or recreational getaways; as such, the minimum age limit for guests is 18. The atmosphere of romance is also created through the Romance Package as an add-on to the stay. The package includes gourmet chocolates, a bottle of non-alcoholic sparkling bubbly, Champaign flutes, an Invited Inn teddy bear, and three roses in a vase that are available to take home.

Recreational activities can be found all around Invited Inn Bed and Breakfast. Deer Creek Reservoir is a 12-minute drive from the property, and the town offers the option to rent equipment to do water sport activities. There are five public golf courses nearby, as well as hiking and biking trails that can be found in the mountains that surround the inn that offer further options for vacation or getaways. The owners say one of the biggest draws to their inn besides their romance packages is the Wasatch Mountain State Park, which is only a two-minute drive from the inn. Midway is also only a 50-minute drive to Salt Lake City, a 32-minute drive to Park City, and a 42-minute drive to Provo Utah. With these cities close to the inn, more options for visitors are available outside of the city of Midway.

Invited Inn Bed and Breakfast is located in a place that provides easy access to restaurants in town. Bill and Susi have been reported by guests to be helpful in helping guests find the best place to eat based on the preferences of the patrons. Some options for dining include Zurmat, Café Galleria, Midway Mercantile, Lola's, and Heber Valley Artisan Cheese which is owned by one of the original families in town. The owners also report there are multiple good steak house options and fast food options as well, which provides many options for those who want a wide variety of choices.

Invited Inn Bed and Breakfast is located in a town with a significant amount of historical backdrop. The name Midway comes from generations ago when the first settlers were afraid of the Native Americans who seemed to be rising up against them. The early settlers felt that there would be greater safety in numbers, which resulted in two towns meeting "midway" between them and establishing a fort to provide safety. The town has grown since then and is commonly known for the culture that it holds.  The inn is just like many other buildings found in Midway Utah, in that it's styled after Swiss architecture. The history behind the style of the town comes from when the Swiss first settled Midway. The land reminded the Swiss of their homeland due to the mountain ranges and cattle, which inspired the culture to continue on in their new home. The Swiss culture can still be found in the region today through events such as Swiss Days. This activity has been a tradition for the past 80 years, and it is always held every Labor Day weekend.

The initial building that comprises Invited Inn Bed and Breakfast was purchased in 2002 by Bill and Susi and renovated over a four-span. Bill says that Susi had the idea to own an inn from her time spent in Europe, which resulted in the creation of their lodging establishment. The building is 35 years old, was constructed in 1986, and now currently has more capabilities than it did when owned by the previous landlords. Bill and Susi not only converted it into a bed and breakfast but also a functioning spa.