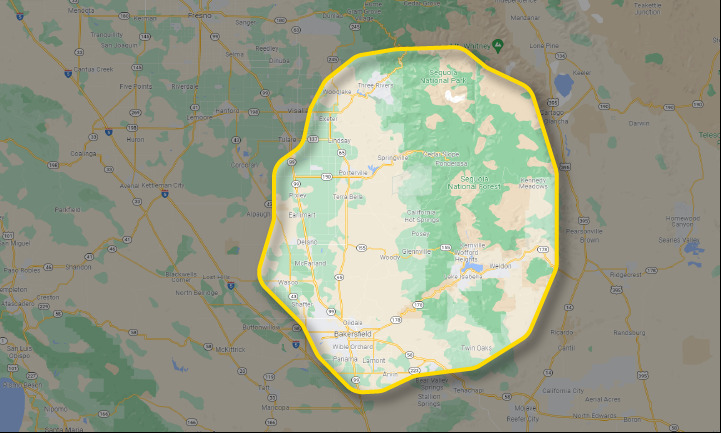 What Sequoia National Forest is known for

The Sequoia National Forest Region is named after the federal area of the same name. The forest stretches over roughly 1.2 million acres in southern California and is home to hundreds of miles of trails, 38 groves of sequoia trees, and 52 developed campgrounds that visitors can choose from.[1]

Sequoia National Forest is known best for the Giant Sequoia National Monument, which is a collection of some of the largest sequoia trees in the world. Some of the trees' trunks have a hole or hollow space that has been cut into it so that people can walk through it and or enter for a unique picture. The diameter of the largest trees easily exceeds 20 feet, and the height can reach up to 200 feet. Many of the visitors who come to the region are seeking this distinct outdoor experience. [3]

The national park receives roughly 1.2 million visitors annually, according to recent statistics.[5] The visitors primarily come between the months of June and August when the weather is most stable.[2] While visiting, people can engage in activities such as hiking, camping, backpacking, and fishing. Specific attractions include Crescent Meadow, Tokopah Falls, Tunnel Log, and the Sherman Tree Trail.[3]

The sequoia trees, which are prolific within both the national park and the national forest, do not grow virtually anywhere else in the world. They have unique conditions for their growth (including aspects of the climate and altitude), and Sequoia National Park, in particular, was created for the preservation of the species.[4]

In addition to the extensive outdoor attractions, the Sequoia National Forest Region also includes Bakersfield, CA. Though the city is not known as a traditional tourist destination, it is a hot spot for live music and has a handful of attractions. The Bakersfield Speedway, Rabobank Arena, and Kern County Museum are all located in Bakersfield.[6] Kern County—the overarching location of Bakersfield and some of the nearby cities, though not the Sequoia National Forest/Park—are top producers of grapes, dairy milk, almonds, pistachios, and vegetables.[7]

The Sequoia National Forest Region is located in southern California. The boundaries of the destination include Sequoia National Park at its northern border, stretching out a few dozen miles to either side and concluding with Bakersfield to the south.

The geographical topography of the Sequoia National Forest Region is diverse, containing mountain, desert, forest, metropolitan, and farmland areas. Particularly, the landscape directly surrounding the Sequoia National Forest is extremely mountainous. The Isabella Lake rests between the national forest and the national park. Rivers run through the valleys created by the enormous mountains. [2]

Climate-wise, July and August are the hottest months in the region, with an average range of 51 to 77 degrees Fahrenheit. That being said, the temperatures are mild compared to other areas in the northern hemisphere during those same months, especially considering how close the area is to the equator. In the winter, lows average out at 23 degrees, and highs typically only reach the low 40s.[2] There is little to no precipitation during the summer, but winter months see more significant rainfall. In particular, the months from December to February have an average of more than 7 inches of precipitation per month.[2]

As a year-round average, the temperatures of the region are relatively mild and stable. This, combined with the wide range of elevation present in the region, allow for the growth of a variety of plants other than the indigenous sequoia trees. Jeffrey pines, red firs, white firs, ponderosa pines, Coast Douglas-firs, and Lodgepole pines are all other varieties of trees within the region.[1] Nearby animals include peregrine falcons, black bears, and bluebirds.

Speaking of Sequoia National Park, it was originally inhabited by "Monachee" Native Americans. Pictographs that were created by the natives remain today as evidence of their inhabitance. By the time that European settlers had arrived in the area, the Native American populations had already mostly been wiped out due to smallpox. One of the first settlers in the region was Hale Tharp, who attempted to promote the preservation of the massive sequoia trees in the area. For a while, his efforts were mostly unsuccessful. Loggers arrived in the area and cut down many trees. By the late 1800s, however, the loggers were frustrated by the quality of the wood, and the National Park Service placed the Giant Forest (which lies within the Sequoia National Park boundaries) under federal protection. The Sequoia National Forest was created a few decades later to allow for the continuation of logging and other resource collection.[3] 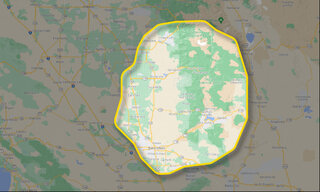