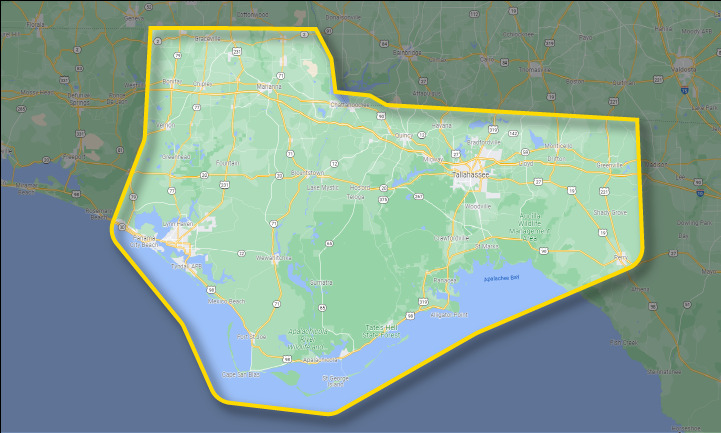 The St. George Island Destination is in Florida. The north end of the destination follows the state line between Florida, Alabama, and Georgia. The rest of the area goes in an curved shape around various cities. Weather in the zone has an average low of around 54 degrees Fahrenheit and an average high of about 83 degrees. Rain is most likely to fall from July to September. The region never gets snow.[5] Within the destination are multiple cities and islands. Some of the more prominant cities are Tallahassee, Hosford, Greenville, and Panama City. There is also the Aucilla Wildlife Management Area and Tate's Hell State Forest. People often come to the region to participate in the many activities that it can offter, including beaches, rivers, lakes, and cities. Things to do within the area, specifically on St. George Island, include the Saint George Island State Park, Sea Oats Art Gallery, Bob Sikes Cut, and the Saint George Island Lighthouse, Gift Shop, and Museum.[3] Other activities can be found in the city of Tallahassee. These include the Tallahassee Museum, the Tallahassee Antique Car Museum, St. Marks National Wildlife Refugee, the Museum of Florida History, and Florida State University.[4]

What St. George Island is known for

The Saint George Island State Park includes trails, beaches, and forests, with various activities available in each. The trails go through woods, making it possible to see wild animals. While at the beaches, people can play in the water or on the sand. The forests are home to many different kinds of animals, most of which include deer and various species of birds. Bob Sikes Cut is a historical site with multiple beaches that people can go to. The Sea Oats Art Gallery has many art pieces, including pictures, paintings, and crafts. The artwork inside the gallery is from a variety of different sources and years.

The Saint George Island Lighthouse, Gift Shop, and Museum has a lighthouse that people can go in, a gift shop with multiple things up for purchase, and a museum that gives facts about the lighthouse. From the top of the lighthouse, beaches, houses, and a bridge are visible, along with various other buildings.[3] Things to do in Tallahassee include St. Marks National Wildlife Refugee, the Tallahassee Antique Car Museum, Florida State University, Tallahassee Museum, and the Museum of Florida History. St. Marks National Wildlife Refugee houses many types of animals.

People who visit the refugee have the opportunity to look for some of these animals. Types of animals in the area include alligators, birds, deer, and snakes. The Tallahassee Antique Car Museum has many cars that people can look at, most of which are older and aren't usually seen on the road. Other exhibits in the museum include a Native American exhibit, a golfing exhibit, and a motor exhibit. Florida State University can be toured and viewed, and there are usually classes going on within the building. Tallahassee Museum has trails that go through forests and swamplands. It also has historical buildings that can be explored, along with a ropes course. There are also animals kept in fenced areas that people can see. Another feature of the museum is the multiple dinosaur sculptures around the property.

The Museum of Florida History has many exhibits on the history of Florida's first inhabitants. There are car displays, animal displays, and displays on what houses were like for the first people living in Florida.[4] The Aucilla Wildlife Management Area has multiple trails and rivers within the property. People can go canoeing on the rivers. The trails go through forests, where wild animals can be seen.[8]

Tate's Hell State Forest has multiple trails for people to go on, and there are many creeks and rivers in the area. While on the property, people can go fishing, canoeing, kayaking, and boating. Tate's Hell State Forest has a legend. According to the legend, a man named Cebe Tate went into the swamp with only a shotgun and his hunting dogs to find a panther that was killing his livestock. Tate was lost in the swamp for seven days and nights and ended up getting bit by a snake and having to drink from the murky water to quench his thirst. He came to a clearing near Carrabelle and died after saying, "My name is Cebe Tate, and I just came from Hell." His adventure took place in 1875. Ever since then, the swamp has been known as Tate's Hell.

Weather in the destination has a wide range, with an average high of around 83 degrees Fahrenheit and an average low of about 54 degrees. Rain is more likely to fall from July to September. It never snows in the area. The most popular months to visit the region are June, July, and October. Because of the weather, the best time to visit the zone is from mid-February to the end of May or from the beginning of October to the end of December.[5]

St. George Island's first inhabitants were the Muscogee people, who lived there between the 10th and 15th centuries. They were later killed off by disease. When European colonists came to the area, it became a struggle for control. The Creek Indians ceded a large tract of land to John Forbes and his company, called Forbes Grant, in 1803. Part of this land included St. George Island. John Lee Williams sought refuge on the island in 1823. Because of the shortage of food, his crew depended on the oysters and crabs the island had. The island experienced high levels of trading activities soon after. Most of the trades happened along the Apalachicola River.

The Cape St. George Lighthouse was built on the island in 1833 to help guide boats at night to the trading areas. Later, from 1847-1848, the lighthouse was torn down and rebuilt two miles away. In 1851 the lighthouse was destroyed by a hurricane and was reconstructed. During the American Civil War, it was taken out of service. After the war, it was used as a navigational tool for incoming ships. The lighthouse was decommissioned in 1994. The tower was undermined because of hurricanes in 1995 and 1998. Despite the new foundation that was constructed under the tower, it collapsed in 2005. Since then, it has been rebuilt.

The 1872 Denham Inn is located in Monticello, Florida. There are seven rooms at the inn, one of which is a separate carriage house that can sleep up to five people. Generally, every room includes a television with Netflix, ironing boards, hairdryers, robes, and slippers. The carriage house, however, is more equipped for those who are planning on staying for slightly more extended periods of time, providing guests with amenities such as a microwave, a refrigerator, and an oven. The home was originally constructed in 1872 but wasn't converted into a lodging enterprise until 2000. 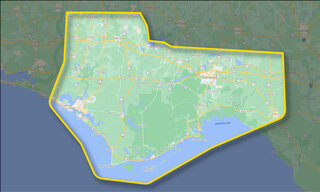