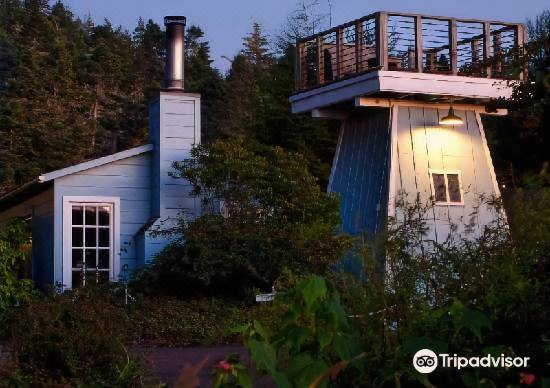 The Inn at Schoolhouse Creek occupies land in northern California on the coast. A total of 11 buildings are located on the 6.2 acres of land that the current owners first acquired in 2012. Among the buildings, there are a total of 17 units for visitors to stay in. One of the most prominent features of the resort is the pet-friendly environment, which is emulated through the provision of pet amenities such as food and water bowls, toys, and a designated play area on the premises. Guests can participate in the provided outdoor activities on-site or can explore the local attractions and restaurants using a map of the general area, which is given to patrons upon arrival. The owners strive to offer a relaxed experience for their guests, and they hope that visitors will not hesitate to ask any questions in preparation for their visit or during their stay.

Situated on the expanse of approximately 6.2 acres of land, the Inn at Schoolhouse Creek features 17 units scattered throughout 11 buildings in total. Four of the buildings have a style similar to a motel, while others have a family style as they include accommodations such as a full kitchen, a private backyard, and an ADA-accessible room. The property features honeymoon-style suites as well, which include jetted tubs. Separate cottages can also be found on the premises.

Each of the rooms and cottages contains standard amenities, and if a full kitchen is not provided in the unit, a mini-fridge, microwave, and coffee pot are included. For the units that do include full kitchens, dishware and cookware are provided, as well as coffee cream, sugar, honey, and other similar items. Bathroom amenities such as shampoo, conditioner, body wash, and hand soap can also be found in all the rooms. Additionally, every unit includes TVs and DVD players. Amenities of each specific unit can be found on the Inn at Schoolhouse Creek's website.

The manager comments that the Water Tower room is the most popular unit and is almost always booked. Its popularity is likely due to the history and design of the unit, as it includes a private courtyard. In World War II, the on-site water tower was used to hold an anti-aircraft machine at the top. A spiral staircase that leads to a private viewing deck of the ocean is featured in the water tower, in addition to a private hot tub located at the base of the structure. The staff remarks that there have been a fair amount of journalists who come to stay at the water tower and have written about it.

The Inn at Schoolhouse Creek has hosted weddings in the past, though the property doesn't host weddings currently. A forty-five-seat dining room where the property's restaurant was formerly located is now available for larger groups to hold events. The manager mentions that they now call this dining room area "the lounge," and visitors are welcome to use the room to socialize or gather.

Located near the back area of the grounds is a creek trail that leads to a "babbling brook," as the manager says. There is also a pet meadow that patrons can bring their pets to so they can be off-leash and play. Another on-site feature is a yurt that, over time, became a storage area, though it used to function as a spa. The owners hope to bring back the spa for future guests to utilize. The backyard area also features a community hot tub and sauna available for use.

When guests check-in, a map of the property is given to them. The area can be considered rural as there aren't any major cities or towns nearby. The staff team mentions that oftentimes many stars can be seen at night from the property due to there being fewer lights on at night from other buildings. For guests who are hoping to explore the area, the staff remarks that they can recommend a few nearby attractions and some local restaurants. Visitors may not have to leave the premises to participate in activities, as the Inn at Schoolhouse Creek provides games such as giant Jenga, corn hole, and other similar items.

The Inn at Schoolhouse Creek provides accommodations for pets that may not be found at other properties. Pets are allowed to stay with guests on the property but are not to be left alone, and they must be leashed at all times, with the exception of the pet meadow. There is a limit of two dogs per room, and an area is provided outside for pets to play in. One particularly unique aspect of the property is that pet beds, bowls, trays, toys, and treats are all provided for patrons' pets. The owners also send pet letters before visitors' stay that are addressed to the patron's pet.

Though the property itself does not host events, the owners allow larger groups to come and stay on the premises, and they strive to assist with basic concierge service and coordination for events that are hosted on the grounds. If patrons are interested in local activities, the owners may be able to coordinate with people in town to assist visitors with planning their trips.

The owners want their guests to feel comfortable and relaxed. The staff also hopes that visitors can feel "a touch of country" during their stay. They describes the area to be relatively quiet and wants those who are staying at the Inn at Schoolhouse Creek to feel "a connection to nature." They also remark that interacting with guests is an important element of their job and that they and the owners put forth the effort in reaching out to their patrons often.

A fair amount of previous guests of the Inn at Schoolhouse Creek have commented about the property's close proximity to local attractions. One guest remarked, "The location is close to the town of Mendocino and Fort Bragg, plus several state parks for daytime adventures." The manager mentions that some patrons have commented on how "welcoming and friendly" the hosts were during their stay.

The Inn at Schoolhouse Creek is open year-round, with the busiest season typically lasting from July to August. Though the staff at the property says that May, June, September, and October also tend to be busier months of operation as the weather is relatively warmer. The climate of the area during the month of August tends to be foggy, and the manager comments that locals sometimes call this month "Fog-ust."

Several State Parks can be found within the region, in addition to a sizable fishing community. Whale watching, in particular, is a popular attraction and the local area hosts a whale festival annually that tourists can attend. Another festival in the area is the Wine and Mushroom, where many people come to pick wild mushrooms. Visiting the beach and participating in water recreation is another activity that tourists can take part in. The Inn at Schoolhouse Creek is located outside of Anderson Valley, which has a few wineries in the area. The staff mentions that they would consider the wine prices in Anderson Valley to be relatively affordable. There is a list of local attractions and other things to do in the area on the property's website.

According to the manager of the Inn at Schoolhouse Creek, the business is one of the first inns on the coast, and during World War II the property's land was gifted to one of the coastguards to house the shore patrol. Since then, more buildings have been constructed on the premises and amenities have been adding, making it what it is today. Many of the buildings were established in the 1960s, while some date back to 1862. Peter Freary and Linda Wilson, previous owners of the grounds, played a prominent role in renewing the property's condition and character as they revitalized the gardens, incorporated the Ledford Home, and maintained various historical features of the resort.


The edifices were purchased and sold several times over the course of the property's history up until the land was acquired by the current owners in the year 2012. The manager, has been in the service industry almost her whole life prior to operating the Inn at Schoolhouse Creek. She mentions that her favorite part of the job is working with all kinds of people while being surrounded by the history of the property and the "uniqueness of each building."


Though the Inn at Schoolhouse Creek has not undergone many changes, the owners strive to continue with the property's upkeep. They have performed some maintenance on the buildings such as repainting the exterior a new color, for example, but not much else has been needed thus far. As for future plans, the owners hope to potentially bring back the restaurant that was previously available to visitors, add more units, and reopen the spa.