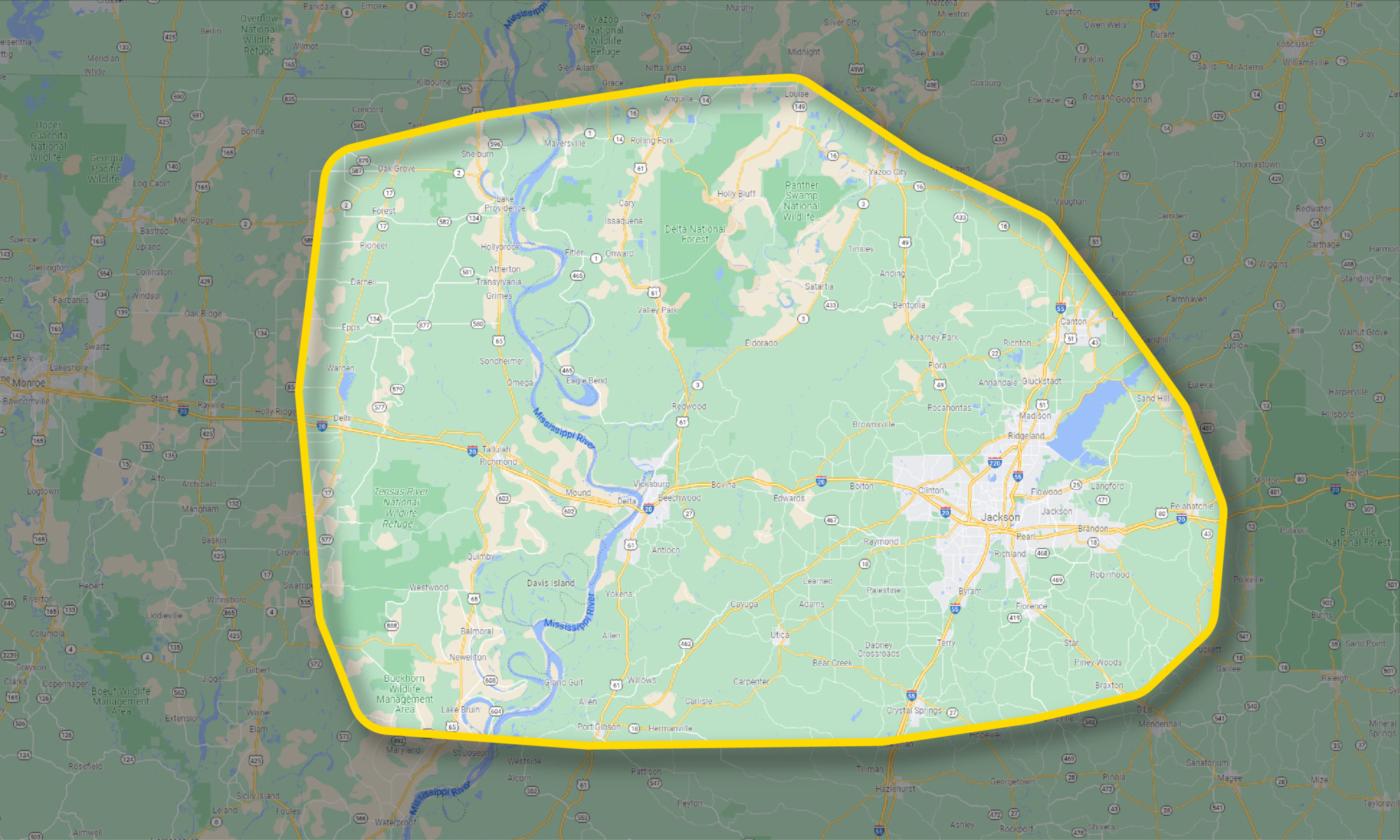 The Mississippi River Destination is located on the border of Mississippi and Louisiana. The region is oval in shape and encompasses Jackson, Mississippi which is the capital of the state as well as a portion of the Mississippi River. Also included in the region are the Tensas River National Wildlife Refuge, the Delta National Forrest, and Lake Providence. Other cities to note in the region include Brandon Mississippi, Davis Island Louisiana, and Clinton Mississippi.[13] The most popular seasons for tourism in the area include the summer months of June, July, and August due to the humidity being around 50-60% generally.[5] The region was originally settled by Native Americans of the Choctaw Nation, and over time they were pushed out by European settlers in the 1820s.[2] The area is known today for the middle section of the Mississippi River which flows through the region, as well as the city of Jackson, which is nicknamed the "City with Soul."[13]

What Mississippi River is known for

The Mississippi River got its name originally from the Algonquin word Misi-ziibi, meaning Great River.[3] The river has historically been used as the dividing line between the east and west. Within the region, the city of Jackson, Mississippi was named after the former U.S. president, Andrew Jackson. However, it was not the man's presidency that owes the city its name, but rather his involvement in the battle that he captained and won called the Battle of New Orleans during the war of 1812.[2] Before the city was developed, the area was settled by Native Americans and other European-American settlers.[3]

While visiting the Mississippi River Destination, there are multiple types of activities that tourists of the area can experience. In the city of Jackson, Mississippi, a popular destination is the Mississippi Museum of Natural Science.[4] The museum has indoor and outdoor components, each with its own purpose and function. Focusing on information about the state’s local landscapes and species found there, the establishment has many educational resources for visitors to the area. Additionally, located in the center of Jackson is the Old Capitol Museum. One of the oldest edifices in the city, the museum contains information about many events that took place within the state.[2] Another museum found within the city is the Mississippi Civil Rights Museum. With the demographics of Jackson being 78.55% African American, the museum focuses on the time period of 1945 to 1976, when the civil rights movement was very prevalent in the country and in Jackson Mississippi specifically.[4] The state of Mississippi has a “Freedom Trail” that runs through the city of Jackson and has multiple museums on the route.[2]

Due to the average temperature and humidity of the region, the best time to visit the Mississippi River Destination is reported to be from mid-March through mid-May.[5] Generally, the busiest tourist season for the city of Jackson, Mississippi is May through July. Historically, November has been a slow month for tourism in the surrounding area, making it a less crowded time to visit. During the fall season, ending in November, rain and colder weather conditions are more common in the region.[5]

One of the most notable areas of the destination is the Mississippi River. The river is 2,320 miles long and runs from Minnesota to the Gulf of Mexico. Popular tourist recreation on the river includes fishing and wildlife watching, due to the river being a major contributor to the plant life and other animal life in the area.[10] There are over 260 different types of fish to be found over the expanse of the river, providing those looking to fish with opportunities to catch multiple types. The river is the fourth largest in the world, after the Nile River, the Amazon River, and the Yangtze River.[11]

The city of Jackson, Mississippi’s slogan is “The City with Soul.” The city has been a sight of multiple musicians from different genres including blues, gospel, folk, and jazz. Mark Ronson, in his song “Uptown Funk,” mentioned Jackson, Mississippi specifically in addition to Harlem, New York, and Hollywood, California.

The Mississippi River Destination encompasses the northeastern corner of Louisiana as well as a section of the western border of Mississippi. Cities of note within the region include Jackson, Mississippi, Vicksburg, Mississippi, and Davis Island, Louisiana. The area also includes the Tensas River National Wildlife Refuge. The Refuge comprises 81 square miles and is home to the last remaining population of black bears in the state.[12] The Mississippi River Destination is home to various types of geography including bayous, bottomland hardwood forests, and major cities.

The Mississippi River is the most notable geographical feature of the destination and is the namesake of the location. The river is broken into three main sections, and within the region is contained the Middle Mississippi River area. The river drops 220 feet in elevation over 180 miles of river, roughly a 1.2 feet per mile drop in elevation.[3] The river contained within the geographical area has no major tributaries that flow into it, unlike most of the other areas along the river. Living within the river is a variety of animals and plant life including several species of turtles including snapping turtles, musk turtles, and softshell turtles. There are also American alligators found in various parts of the river, generally in more swamp-like areas.

The region is located in the southern United States and as such, is known for having a more humid climate than in more northern areas of the country. The least humid month of the year is generally March, with an average humidity percentage of 54.5%. As the weather changes and gets cooler, the humidity tends to increase, with December being, on average, the most humid month with a 64.4% humidity. Generally, in Jackson, Mississippi, the driest months consist of June, September, and October. When visiting the area, the summertime is the busiest tourist season. During the summer months, precipitation generally falls six or seven days every month.[5]

Due to the weather in the area being more humid as well as a range of temperatures throughout the year, the Mississippi River Region is home to a diverse range of plant life that thrives in more humid environments, as well as in swamps and bayou areas. One of the most common types of trees in the region is the Ashleaf maple tree, which grows best in areas such as Jackson where there is sunlight available for a majority of the year. Some flowers in the area include the Eastern blue star which features stems with multiple blooming flowers at a time in a baby blue color, as well as the woodland poppy which is a species of poppy that blooms vibrant purple flowers with white in the center.[8]

The Mississippi River Destination was first inhabited by Native Americans before the United States of America was formed. Originally populated by the Choctaw Nation, the native inhabitants of the area spoke Muskogean[3] and they lived in the area for hundreds of years before European settlers arrived.[3][6] The first European settler in the area that would become Jackson, Mississippi was Louis LeFleur, who was a French-Canadian trader. Before the city was later renamed Jackson, the area was known as LeFleur’s Bluff. The boundaries for the city were obtained by the United States from the Choctaw Nation in 1820, under the Treaty of Doak’s Stand. The majority of Native Americans who were inhabiting the area moved to Oklahoma to “Indian Territory,” which had been established. [2] The Mississippi River was originally named from a word which in Algonquin means "Great River."

The Mississippi River Destination has a range of demographics of people. The city of Jackson, for example, was a relatively small town for the majority of the 19th century, particularly in comparison to other cities along the banks of the Mississippi River.[2] During the Civil War, the city was a center of manufacturing that was used by the Confederate army as a base for strategic operations.[9] Since the Civil War, the city has steadily grown in population. 1980 was an all-time high for the city population-wise, with the 1980 census recording 202.9 thousand people living within the city. Over the decades since the 80s, the population has been on a decline in the city, with the most recent census in 2020 recording 151.2 thousand people.[2]

Today, Jackson, Mississippi is known for having priorities towards education, government, healthcare, and technology as its main focus. Due to the city’s range of industries and interests, in the 2008 recession, the economy was able to fair better than other major cities in the south with an unemployment rate of 7%. Today, the city is striving to create a business environment that fosters growth and economic diversity for the city with the hopes of attracting more businesses and residents to its downtown area.[9]

The Duff Green Mansion is a historic property located in Vicksburg, Mississippi. The establishment was built in 1856 by Duff Green to be his family's home. Over time, the building has had many uses, such as a hospital during the Civil War, the headquarters of the Salvation Army, and a boy's orphanage. Today, the bed and breakfast has nine guest rooms that are available year-round. The rooms are located on the bottom floor of the house and the top floor; the middle level has the dining room, parlor, kitchen, and Victorian game room. Some of the rooms are pet friendly for an additional nightly fee, and each room has a television, free Wi-Fi, and places for guests to store their clothing and personal items during their stay. The grounds of the mansion feature a swimming pool, rose garden, and a courtyard that patrons can utilize. 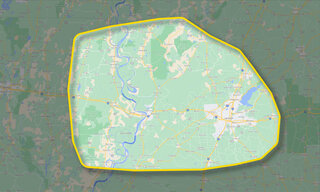