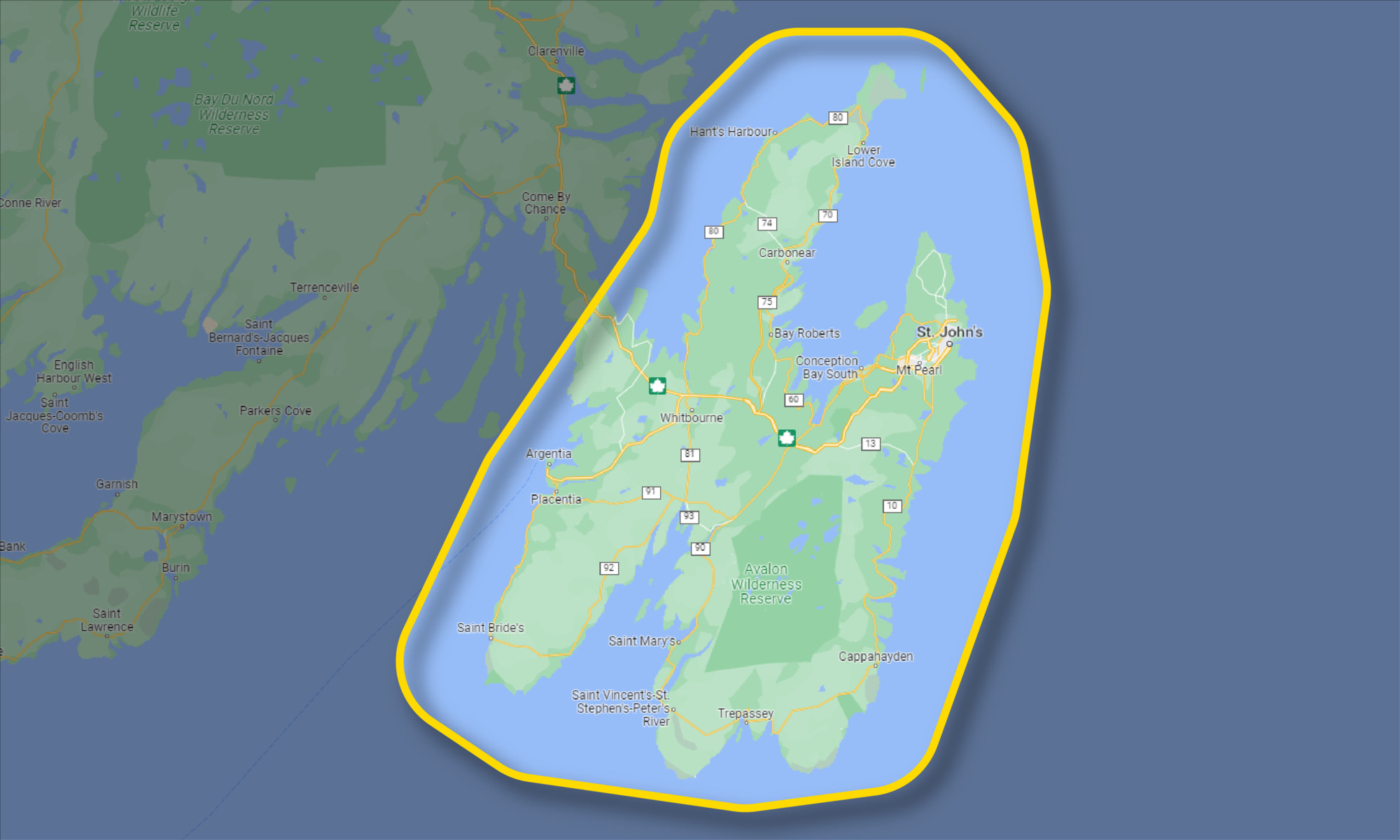 The Mount Pearl Destination is made up entirely of the Avalon Peninsula and is located in Newfoundland and Labrador, Canada. Cities including Argentia, Conception Bay South, Cappahayden, Saint Mary’s, and, the namesake of the destination, Mount Pearl, can all be found within the borders of the destination. The topography of the peninsula is characterized by a fair amount of lakes, ponds, and rivers scattered throughout the destination. A generally sizable portion of the destination is covered by the Avalon Wilderness Reserve, an area where visitors can go camping, hiking, or wildlife viewing. Several mammal species may be spotted in the area, namely, Canada geese, moose, and caribou, to name a few.[3] St. John’s, the capital of Newfoundland and Labrador, is one particular city that typically draws in a number of tourists annually. One of the most popular activities in the city is whale watching, as over 21 species of whales and dolphins reside in the ocean that surrounds the peninsula.[2]

What Mt. Pearl is known for

The Mount Pearl Destination is located in Newfoundland and Labrador, Canada, on the Avalon Peninsula. Characterized by some of the most prominent cities and areas such as St. Johns, Avalon Wilderness Reserve, Conception Bay South, and Argentia, among other places. The Namesake of the destination, Mount Pearl, derives its name from Commander James Pearl, who was a British naval officer. Mount Cochrane was the original name of the city before Commander Pearl was awarded the estate in 1829 by Governor Cochrane. The site was renamed by James Pearl himself after the departure of the governor.[1] Bordering nearly the entirety of the destination, the North Atlantic Ocean encompasses the island on which the Mount Pearl Destination is located. In the northwestern region of the destination, the nearly isolated island has land that is conjoined with a bigger island that is completely separated from (yet still defined as) Newfoundland and Labrador land.

St. John’s, notably one of the most prominent cities in Newfoundland and Labrador, is the capital city of the province. A number of tourists are drawn to the city annually, as various attractions are available. Whale watching, iceberg viewing, hiking, kayaking, rafting, camping, skiing, boat tours, fishing, and visiting the nearby museums are just a few of the activities that tourists may participate in. From May to September visitors can potentially view the 21 species of whales and dolphins as they feed, frolic, and possibly breach the surface of the nearby shores. It is recommended for those who take interest in going whale watching should experience such activities on a boat tour with a guide.[2]

Tourists may find several things to do near St. John’s. A few popular attractions that can be found in the Avalon Peninsula include Grates Cove, Ferryland Lighthouse, Witless Bay Ecological Reserve, and Cape St. Mary’s Ecological Reserve. Grates Cove, located in the northern region, is one such attraction that tends to appeal mainly to photographers and those who take interest in the general landscape of the area. The remains of dry stone walls that were originally built by the Irish Settlers are scattered throughout the fields. Tourists can also visit the community-built museum. A nearby cafe that is conjoined with Grates Cove Studios, a place that rents vacation homes, is open to the public for visitors to stay at during their trip. Furthermore, another attraction is the Ferryland Lighthouse in Ferryland, and its historical significance dates back to when it was first built in 1871. A picnic can be purchased from the staff of the Ferryland Lighthouse, which may contain dishes such as smoked salmon, sandwiches, and salads.[8]

An abundance of wildlife can be found in the Avalon Wilderness Reserve. Nearly 1,070 square kilometers of woodlands and forest areas are protected, and function as a habitat for Avalon woodland caribou. Moose and willow ptarmigan are other animal species that reside in the Avalon Wilderness Reserve, in addition to several fish species in the river, including, brook trout, brown trout, smelt, and landlocked salmon. Bird species such as Canada geese, northern harrier, loon, common snipe, and belted kingfisher also inhabit the land. Tourists can visit the Avalon Wilderness Reserve and engage in hiking, hunting, photography, camping, canoeing, skiing, wildlife viewing, and angling. Four hiking trails stretch throughout the reserve; however, it is not recommended for visitors to hike in the early spring due to higher water levels.[3]

The winter season in St. John’s is relatively long, snowy, and windy, in contrast to the summer season which is short with generally decent temperatures. Temperatures typically vary between 19 and 69 degrees Fahrenheit and the weather is partly cloudy throughout the year. From mid-July to late August, it is considered by many tourists to be the most ideal time to visit the area, especially for those who plan on participating in outdoor activities. The average daily temperature is above 62 degrees Fahrenheit, from June to mid-September. The hottest month of the year in St. Johns tends to be August, while the coldest month is typically February. An average daily high temperature of below 38 degrees Fahrenheit affects the cold season, from the start of December through to the beginning of April. September is reportedly the month that has the highest number of days that are partly cloudy or clear, which occurs 50% of the time throughout the month.[4]

The city of Argentia, in the northwestern part of the Mount Pearl Destination, previously functioned as a herring and salmon fishing port. It had formerly been known as “Little Placentia,” but was renamed Agentia, a word that derives from the Latin word for “silver,” argentum. This name change was due to the discovery of silver in the surrounding land. In 1941, many of those who lived in Argentia had to move to a nearby city called Freshwater. This was because Argentia became the site of the first U.S. lend-lease military base. A monument located along the shoreline of the bay was made in honor of the event that took place in 1941 when U.S. President Franklin D. Roosevelt and Sir Winston Churchill, the British Prime Minister, agreed to the Atlantic Charter, which regarded the sovereign rights of nations. During World War II, Argentia operated as a major military installation; however, following World War II, its facilities were decommissioned, abandoned, and given to Placentia in the year 1994 with the goal to develop it into a commercial port.[5]

Placentia, the neighboring city to the south of Agentia, was presumably named after Plasencia, Spain, by Basque fishermen who arrived at the site in the 16th century. The land was permanently settled as Plaisance in 1662 by the French, as they made the site into a base for attacks against the British-held St. John’s. In current times, the fortifications that had been used in historical times are now preserved as Castle Hill National Historic Park.[5]

St. John’s remained the heart of commercial trade in the Newfoundland fishery throughout the first half of the 20th century. With the passage of the City of St. John’s Act by the Newfoundland government, the area became incorporated as a city In 1921. Currently, it is the capital of the province and the main financial and commercial center for Newfoundland and Labrador.[6]

One particular historic site that tourists may have the opportunity to visit is the Signal Hill National Historic Site. The historical significance of the site is evident in the features that reflect Canada’s history of defense and communications. Signal Hill had been formerly used during the 17th Century for the observation and signaling system that was used during the Second World War. Additionally, in the year 1901, Signal Hill is where Guglielmo Marconi received the world’s first transatlantic wireless signal. Coastal hikes that lead to an overlook of the Atlantic Ocean are available to visitors. On occasion, whales and icebergs can also be seen from Signal Hill, depending on the season.[7]

The Roses Heritage Inn is located in St. John's, Newfoundland. The property has existed since 1905, being built by a man named Dr. Murphy. There are two buildings that make up the entire inn, with 17 units available between the two. One building, the Rose, has 11 of these rooms, and the other, the Jelly Bean, has the remaining 6. Each room has some basic amenities, including free internet, TVs, and free movie channels. All of the rooms are unique from one another, though many of them are furnished similarly and adorned with old-fashioned art. The owners of the property hope that those who stay with them feel comfortable and happy. They enjoy getting to know their patrons, often talking with them and recommending places for them to visit or eat at. 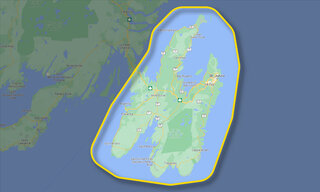