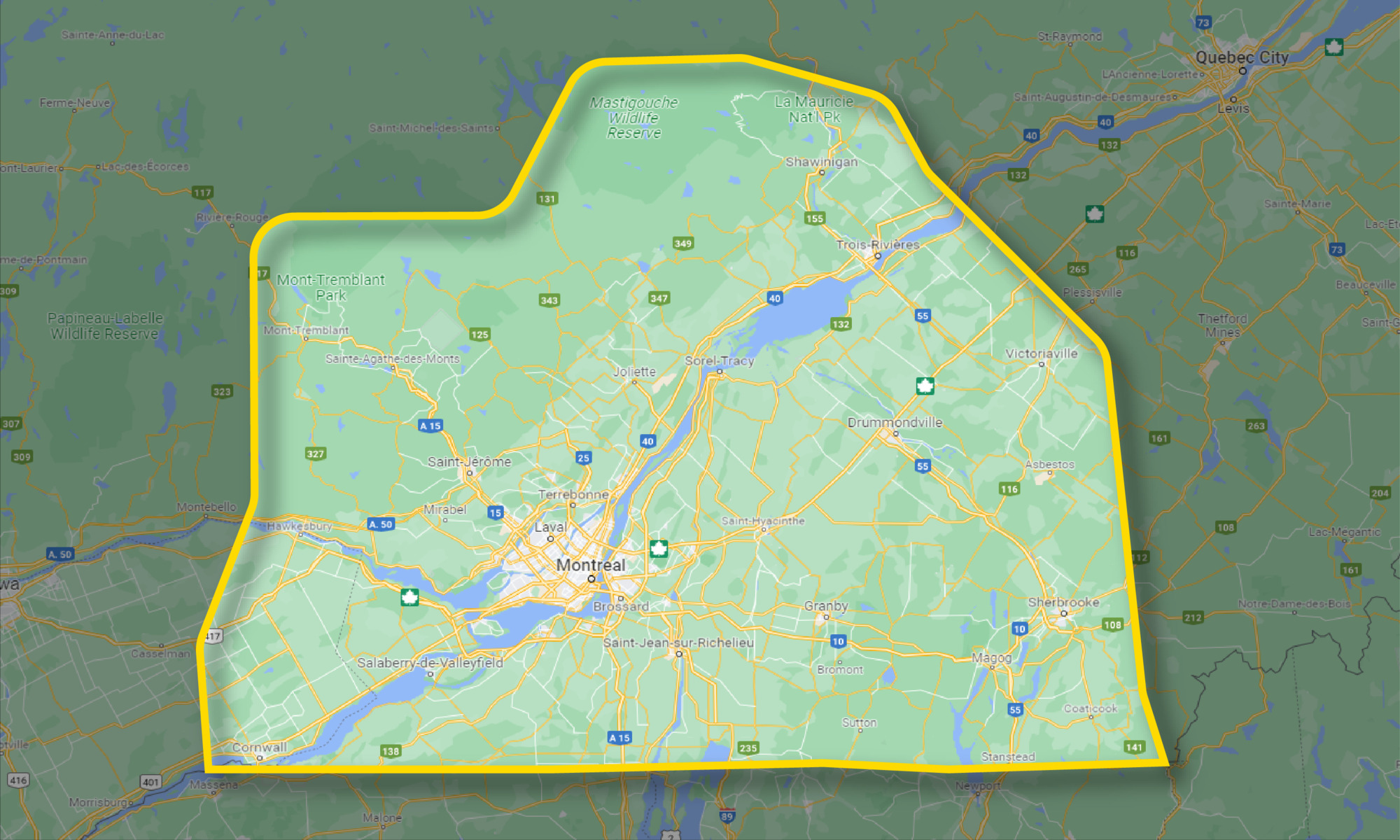 Salaberry-de-Valleyfield is a destination that is located in the province of Quebec, Canada. There are multiple environments within the region, including the urban city of Montreal and the forests that are characteristic of La Mauricie National Park. The destination is square-shaped and encompasses Montreal, Salaberry-de-Valleyfield, Brossard, Mont-Tremblant Park, and Saint-Jean-sur-Richelieu. The Saint Lawerence River is the most prominent water source in the area, and both Salaberry-de-Valleyfield and Montreal reside on islands in the river. Various activities that tourists can take part in include fatbiking, ice diving, and cycling. The city of Montreal has multiple historical locations in the city that visitors can enjoy as well.

What Salaberry-de-Valleyfield is known for

The destination is named after a city located in the area, Salaberry-de-Valleyfield. The city is located on Grand Ile Island, in the Saint Lawerence River. Before the city was established, the area was known as Pointe-du-lac, or Point of the Lake. The unique name of the city came from Colonel Charles de Salaberry, who was a British Colonel in the war of 1812, and the Valleyfield Mills, which is a paper mill in Scotland.[2] Another area of interest for many tourists in the destination is the city of Montreal, which is the second most populated city in Canada. Early settlers to the area called the site where Montreal now sits Hochelaga, named by the Huron people.[3]

The island city of Salaberry-de-Valleyfield has an assortment of available activities, including fishing, cycling, golfing, and ice diving. A popular attraction in the city is found at the EcoDive Diving Center, ice diving involves scuba diving underneath the ice. This can be done by both amateur and professional divers at the diving center. An outdoor activity enjoyed by visitors as well as locals is fatbiking, which is an all-terrain bike with oversized tires. Fatbiking can be done in all weather conditions but is most commonly done in winter conditions such as snow. There are multiple fatbike rental companies available across the island for those looking to try the sport to rent the equipment. [1]

Also located within the destination, the larger city of Montreal is home to multiple attractions. La Grande Roue De Montreal is the largest observation wheel in Canada, taking tourists approximately 200 feet into the air. It is situated in the Saint Lawerence River and offers views of Old Montreal, the historical district of the city. Another attraction in the city is Marche Jean-Talon, or the Jean-Talon Market. The open-air market is located in the area of Montreal known as “Little Italy” and is one of the largest open-air markets in North America.[4]

Due to the weather, the best reported time of year to visit the destination is the middle of May through the beginning of October. Generally, the height of tourism in the area takes place during the summer months of June, July, and August. Weather during this time is relatively moderate for the area, with a predicted rainfall of seven to eight days a month[6]. The destination of Salaberry-de-Valleyfield has multiple outdoor recreational areas that tourists can visit. The area is home to La Mauricie National Park, as well as the Saint Lawerence River, and Mastigouche Wildlife Reserve. These areas offer hiking, biking, and observation of various wildlife.

The city of Montreal is home to the acrobatic group called Cirque du Soleil. The group travels around the world but has its home base in the city. Montreal was the first city in Canada to host the Olympics. The games were hosted in the city in 1976, which was a summer Olympics year. Sports hosted during the games included tennis, track and field, and gymnastics. The city has also been host to the International and Universal Exposition in 1967. [6]

The area encompassed by the Salaberry-de-Valleyfield Destination is home to a variety of plant and animal life. The area is mostly forested, with major cities such as Montreal being more urbanized. The north part of the destination has multiple national parks and a wildlife refuge, making the area a destination for many tourists seeking outdoor recreation activities. There are multiple rivers and lakes such as Lake Memphremagog, the Ottowa River, Lake Saint Pierre, and the Saint Francios River. Due to the Saint Lawerance River that flows through the majority of the destination, the area is generally green with diverse plants that do well in moist and colder environments.

Salaberry-de-Valleyfield and Montreal are both located in the destination and are the most populated cities in the area. For the city of Montreal, the busiest tourist season is reported to be the summer months, with the busiest being July, followed closely by August and June. Throughout the year, the weather varies due to humidity and precipitation. If visitors are looking for the driest months of the year to visit the area, generally January, November, and September provide those conditions, however, these months are also reported to be the coldest months on average for the area.[7] The lowest temperature ever recorded for Montreal was -37.8 degrees Celsius, (-36 degrees Fahrenheit) in January of 1957.[6]

Throughout the various seasons of the year, different activities are available for those visiting the area. In the winter months, popular activities include fatbiking, as well as paraskiing and kicksledding. Paraskiing can be enjoyed by tourists when lac Saint-Francois freezes over. It is a sport that combines parasailing and skiing. Those who participate in the sport can use parachutes, similar to those used for parasailing, in combination with skis to be carried by the wind across the lake and ski. Kicksleds can be rented at various stores in Salaberry-de-Valleyfield and are most often used in Îles-de-Saint-Timothée regional park.[1]

Due to the climate of the destination, there are a variety of birds, flora, and fauna that are present in the area. Some of the common flowers found in the forested areas outside of Montreal include chicory, bloodroot, and bittersweet nightshade. Chicory is a flowering plant from the daisy family, with flowers that are generally bright blue but can be found in white and pink as well. The bloodroot flower comes in multiple colors and petal types, however, they are characterized by the color of the liquid that comes from the roots, which is red and poisonous. Finally, bittersweet nightshade flowers have purple blooms and bright red berries.[8]

A relatively diverse group of animals is native to the destination. Some common animals found in the area include North American river otters, white-tailed deer, and northern map turtles. Canadian geese are native to the province of Quebec, as well as ruby-throated hummingbirds, and black-crowned night heron. The black-crowned night heron is characterized by black feathers on the crown of the heads, with a few long, white feathers protruding from the back of their heads.[8]

The area contained within the Salaberry-de-Valleyfield destination was originally inhabited by the Huron people, a Native American population that lived in the great lakes area. In 1535, a Frenchman named Jacques Cartier came to the area and named the nearby mountain Mont Real, or Mount Royal. Over time, the area was inhabited by missionaries and was a religious hub for eastern Canada. Due to its location on the Saint Lawerence River and its close proximity to the great lakes in the United States, the area soon became an important destination for the fur trade.[3]

Montreal was established as a city in 1832. From 1844 to 1849, it was the capital of the Province of Canada, which was a British colony in the region at that time. Montreal lost its status as the capital of the province after a mob burnt down the parliament building as part of a protest; the capital was then changed to Quebec City until 1857 when the Queen of England established Ottawa as the capital, which it still is today.[5] Today, Montreal is the second-largest city in the world that has French as its primary language, behind Paris, France.[6]

The city of Montreal has a variety of historical landmarks that tourists can visit during their trip. The Notre-dame Basilica was built by an Irish-American architect who, after designing the building for the Catholic Church, loved his building so much that history says he converted to Catholicism.[9] Additionally, a borough of the city is nicknamed “Old Montreal” and has buildings that date back to the 17th century. Within that area of the city, different attractions to visitors may be Place Jacques Cartier, The Clocktower, or the Labyrinth.[9] Other areas to note within the region include the Mastigouche Wildlife Reserve which contains a vast array of animal and plant species and La Mauricie National Park which was established in the 1970s.

The primary language spoken in the Salaberry-de-Valleyfield destination is French, with 66% of those who live in the area speaking it as their first language.[5] Multiple Olympic gold medalists have come from Salaberry-de-Valleyfield, including Jean-Luc Brassard who won a medal for skiing, and Mélodie Daoust who helped win the medal for hockey.[2] Within the city of Montreal, a large portion of the economic support comes from manufacturing companies. Over the past few years, manufacturing is being pushed out by other types of industry, including food and tobacco production. The Montreal Stock Exchange was the first established stock exchange in the country, but in the 1990s the stock exchange was transferred to Toronto in an attempt to have exclusivity in the market.[10]

En Passant B&B is located in a neighborhood area of Cornwall, Ontario—a province in Canada. The B&B's theme is modeled after the game of chess, something that guests may find unique. As such, its two guest accommodations are respectively known as the King room and the Queen Room. Visitors at the En Passant B&B may enjoy participating in one of the several festivities held in the area, such as the Cornwall Ribfest. Ontario—Canada's capital city—is also located in Ottawa, as well as Toronto—the most populated city in Canada. 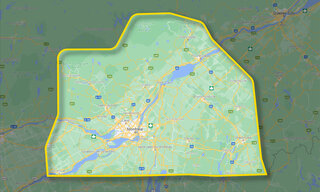