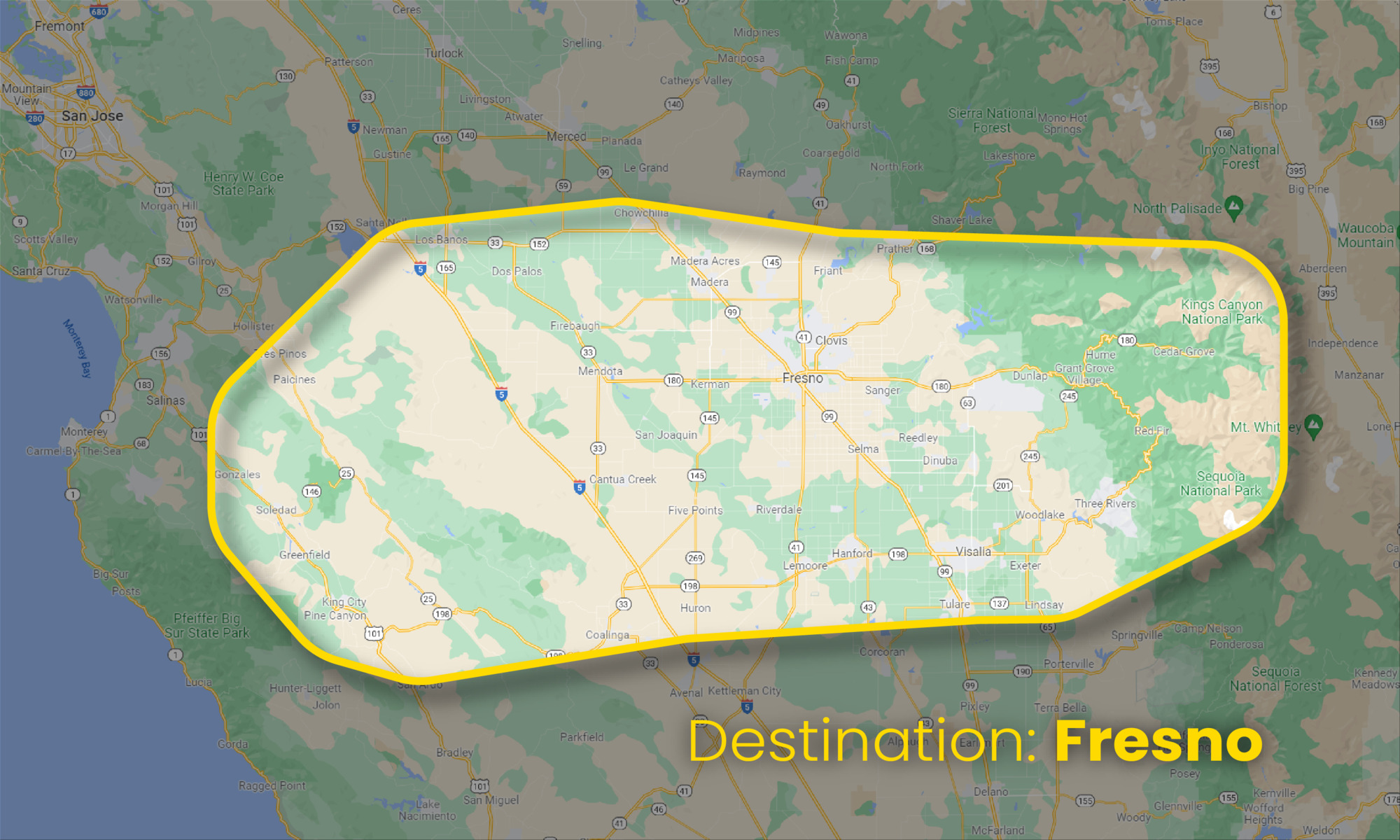 Fresno Region is bordered by Yosemite National Park, Kings Canyon National Park, and Sequoia National Park. The region is in the center of the southern area of California along the Sierra Moutain Range. Fresno is known for its large agricultural community and urban cities. Blossom Trail is a sixty two-mile trail that runs through many nut and fruit tree orchards in the area. The national parks are another big draw to the area. Fresno is the largest of the region's cities. Mendota and Bakersfield are also large cities within its borders. Average temperatures throughout the region range from 60 to 90 degrees throughout the year. The general geography of this region is covered in orchards and commercial farmland. Sequoia forests and desert paths fill the National Parks. Fresno receives around eleven inches of rain a year, with mostly sunny skies.[1]

What Fresno is known for

Fresno is both the namesake and the center of the region. The city covers around 112 square miles of the area across California's Central Valley. The city is the fifth-largest city in California and the most populous inland city. It is also the 34th most populous city in the entire nation. The area is named after the Spanish word for the Ash Tree, which grow in abundance throughout the region. The area is famous for its close proximity to three major national parks; these include Yosemite National Park, Kings Canyon National Park, and the Sequoia National Forest. When visiting the parks, hiking, mountain biking, and rock climbing are popular among guests staying from neighboring cities and more local areas.[1] Those from out of state come to see the giant sequoia trees and granite dome cliffs. There are many trailheads and visitor centers throughout the parks.[3]

Because the region is covered in miles of farmland, guests will often take tours through orchards and fruit farms. Vineyards line the region's borders, and many wine tours and tasting rooms are spread across the valley. There are multiple sports arenas and stadiums in Fresno. During summer, the annual Woodward Shakespeare Festival is held in Fresno and the surrounding land.[4] This attraction is a big draw for out-of-state visitors.

Over sixteen million visitors visit the region annually. Visitors most often spend time in the Fresno Region between July and December. The spring holidays are also a typical time for visitors to spend time in the Sierra Nevadas exploring the national forest. During these months, the weather is sunny and warm but not over ninety degrees. This provides a sunny escape for visitors. Those who spend time primarily in Fresno taking wine tours and other local attractions are usually from surrounding cities or other California areas. Visitors who spend time camping at the parks and more of the area's geographical attractions are often from neighboring states such as Nevada, Arizona, and Utah.[5]

There are over nine farmers' market stands in the Fresno Region; here, they sell all types of local produce and some artesian goods. Seasonal produce such as fruit, corn, lettuces, and berries are sold at the market along with artesian specialties, home decor, and sometimes even a vintage auction will take place in a market.[4]

The region has over ten thousand hotel rooms for out-of-town visitors and is only an hour and a half drive from Los Angeles and the ocean. The Haggin Museum is a historical spot for visitors looking for a place to highlight important history throughout the region. Built in the early 19th century, this brick building is the centerpiece of Stockton's Victory Park. Fresno Region is known for its fresh produce, including almonds, grapes, pistachios, tomatoes, and mandarins.[7] Foster Farms is one of the largest businesses and employers in the region. Here they raise and package poultry to sell in grocery stores across the country.

Fresno City is the largest city and center of the Fresno Region. The region spreads out to the three national parks at its borders and King City near the pacific coast. The area spans roughly 100 miles in each direction from Fresno. South of Fresno is the southern end of the Sierra Nevada Mountain Range; here is the Sequoia National Park. The park is known for its abundant forests filled with Sequoia trees, and underground crystal caves also fill the park. The Moro Rock granite dome is a popular hiking spot where visitors can look over the entire valley. Rivers, streams, and a small lake spread throughout this park where visitors can bike, hike, rock climb, and fish. Northeast of Fresno is the Yosemite and Kings Canyon National Parks. These well-mapped areas also spread across the Sierra Nevada Mountain range.[1] Each park contains a wide variety of plants and wildlife. The Fresno Region's valley encompasses miles of rolling hills filled with land used almost entirely for agricultural purposes. This vast valley is filled with vineyards, fruit orchards, and nut tree farms. The weather throughout the Fresno Region is primarily warm and sunny.[6]

During the summer months, the temperature is high between 90 and 100 degrees. However, it significantly cools down from October to February, dropping between 40 and 60 degrees. Snow is uncommon, though rain is a little more prevalent. The region sustains around eleven and a half inches of rain annually. The weather adds to the agricultural success for many businesses and households nearby.[3]

The forest and farmland provide a place for a variety of wildlife, including wild rabbits, mule deer, multiples species of geese and duck, and black bears. There are over twenty-eight different wildlife habitats and main plant life areas throughout the region housing these animals. One hundred sixty-four notable status plant life species that are either endangered or rare are spread throughout the area; thus, there are lots of insects. Birds such as hawks and scrub jays fill the skies. Lake Berryessa is located southeast of Fresno, just above Bakersfield; this lake is filled with a variety of trout and bass.

The Fresno region was originally home to the Yokuts and the Miwok. Explorer Pedro Fages established the county of Fresno in 1856 after the California Gold Rush. Millerton was the first city in the region and was set along the San Joaquin River banks. In 1867 however, the river flooded, creating the need to rebuild Scottsburg and Kings River.

The Central Pacific Railroad built a station near Easterby's in 1872, and over time the city of Fresno grew around this station, starting the South Pacific Line. The railroad provided jobs and recourses for those living in Fresno, and over time, residence started farming the ideal soil. They planted fruit orchards, vineyards, wheat, and cornfields. Forty-nine miles of track ran through the valley out of Fresno.

The Fresno Municipal Sanitary Landfill was the first modern landfill built in the United States, and although it is not operating today, it still remains a historical site. Multiple Japanese internment camps were spaced throughout the region during the world war, and the Fresno Fairgrounds were part of the Pinedale Assembly Center. The Bank of America credit card was invented in Fresno in 1958 and went on to be the first successful credit card. The company was then rebranded to be Visa Inc. Some movies and many movie scenes were filmed in Fresno.[1]

The valley is known for its wide variety of cultures. They celebrate many American and South American holidays, these include Martin Luther King Day, Mexican Independence Day, and the Cesar Chavez Celebration. Visitors can expect to eat authentic Mexican food and walk Japanese festivals, and gardens spread throughout the valley to honor fallen ancestors.[9] 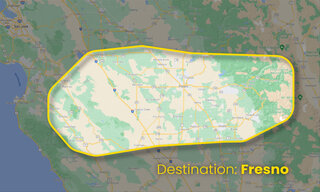