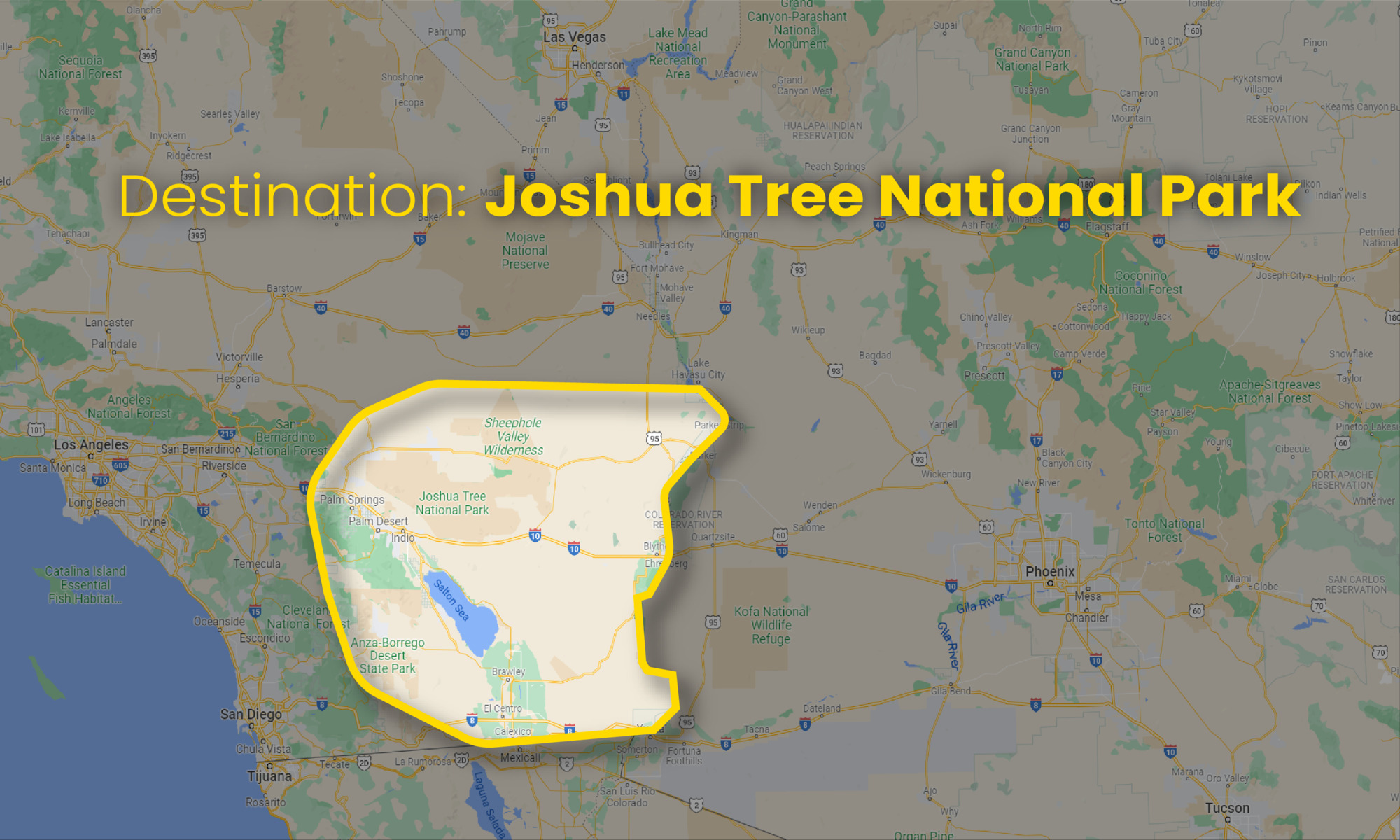 The Joshua Tree National Park Region is located in the center of California on the eastern side. The destination is mainly covered in desert landscapes with multiple national and state parks within its borders.[6] The area is famous for its distinct trees known as the Joshua tree.[1] Millions of visitors from all around the United States spend time in the rural, hot desert land to hike and observe the unusually shaped trees.[10] Spring and fall are warm but not sweltering and draw the most visitors.[2] The land throughout the territory is covered in various monoliths, valleys, and dunes.[6] The popular resort-filled city Palm Springs is located in the area and Coachella Valley, where the Coachella music festival is held every year.[5] The Anza-Borrego Desert State Park is also located within the destination and is the largest park in the entire state of California.[7]

What Joshua Tree National Park is known for

The Joshua Tree National Park Region is located in the most rural desert area of Southern California. Joshua Tree National Park is the destination's namesake and covers almost 800,000 acres of land in the area. The park is famous for its distinct trees, including the Joshua tree, yucca palm, pinyon pine, and juniper. While visiting the park, visitors can go hiking, bird watching, rock climbing, and biking. Photographers will commonly visit the park to take photographs of the rare desert landscapes and wildlife. Multiple ranger programs offer activities and park exploration guides. There are no large cities near the national park, and the lack of pollution makes the sky extremely clear for stargazing.[1] The Anza-Borrego Desert State Park is the largest park in California, south of the Salton Sea and Joshua Tree National Park. The park is near Borrego Springs and is known for its numerous slot canyons and wind caves. The Galleta Meadows is located in the Anza-Borrego Desert State Park, along with sculptures and the Font's Painted Canyon.[7]

The Salton Sea is a shallow lake filled with a variety of minerals, primarily salt. The lake is drying up, but most visitors come to admire its uniquely-covered water. Nearby there is a large museum. Here visitors can hike around and explore the lakeside.[8] The Sheephole Valley Wilderness is located in the north area of the destination. The wilderness is a preserve featuring giant boulders and sand dunes famous for ATVing and horseback riding.[9] A small portion of Coachella Valley spreads into the Joshua Tree National Park Region. The valley is known around the world for its Coachella music festival.[1] Borrego Springs is a commonplace for visitors to stay while visiting the Anza-Borrego State Park, the Salton Sea, and the Joshua Tree National Park. The city is home to the world-famous Sky Art Metal Sculptures. Visitors can go hiking, biking, ride horses, visit luxury resorts and award-winning golf courses.[7] Palm Springs is a high-end vacation spot for California locals. The city is known for the hot springs located in the northern area of the city. There are many stylish hotels, golf courses, and vintage boutiques throughout the city.[9]

Palm Desert is another tourism-oriented city with the Living Desert Zoo and gardens, McCallum Theatre, and multiple designer boutiques, restaurants, and art galleries.[8] Twentynine Palms is the Joshua Tree National Park's entry and exit point and has many high-end resorts and golf courses throughout its perimeter.[1]

Around three million visitors visit the Joshua Tree National Park Region annually. The peak season for tourism is March through May and October through November.[10] The temperatures during these months are comfortable at an average of eighty-five degrees. Wildflowers tend to bloom [are blooming], and the skies are usually clearer [skies are clear] during these months.[2] Because the land is primarily a harsh desert, not much can be produced from the Joshua Tree National Park Region. However, some crops of olives, nectarines, almonds, and avocados are grown in the area.[6]

The Joshua Tree National Park Region is located in the eastern end of South California's transverse mountain ranges. The park is comprised of 794,000 acres. Six hundred thousand acres of the park are wilderness areas. The park spans sixty miles from east to west and thirty miles north to south. Just west of the park are tall mountains.[1] The destination is located partly in the Mojave and Colorado Deserts. The land is covered in a geographical maze of sand dunes, dry lakes, flat valleys, rugged mountains, and granitic monoliths.[6]

The weather in the Joshua Tree National Park Region changes drastically between the season. Summers are sweltering and last three months from June to September, with a daily average temperature of ninety-one degrees. Winters are mild during the day, but temperatures can drop below freezing during the night. The season lasts from November to February and supports an average temperature of sixty-six degrees during the day and thirty degrees during the night hours. Due to the extremely hot winters, there is little precipitation during the summer months and there are typically clear skies day and night. The winter season lasts from November to February. Two inches of rain and usually no snow cover the territory each year.[2] Visitors will most often visit during spring or summer when the weather is warm but not too hot. These seasons are ideal for outdoor activities to enjoy during less intense sunshine, such as hiking, biking, and mountain climbing.[10] The destination is a unique economy comprised of the main ecosystems of the Mojave and Colorado Deserts. The dominant ecosystems together create one capable of hosting the Pinyon Pine and Juniper Trees.[1]

The Salton Sea, Anza-Borrego Desert State Park, and Sheephole Valley Wilderness are all major parks and attractions within the area.[5] Roadrunners, rattlesnakes, birds, lizards, and ground squirrels are all commonly sighted animals during the day throughout the area. Snakes, bighorn sheep, kangaroo rats, coyotes, and black-tailed jackrabbits are all animals that spend most of their time running around during the night.[3] There are over 750 species of vascular plants in the territory. Nearly half of them are annual plants. Trees, shrubs, cacti, ferns, mosses, liverworts, and lichens are all commonly sighted plants.[4]

Joshua Tree National Park was established in 1994 when Franklin D. Roosevelt signed a proclamation designating the 794,000 acres of land as a national park. The park itself is larger than the state of Rhode Island and stands as a national monument. The Serrano, Cahuilla, Chemmehuevi, and Mojave tribes are natives to the land that is now the Joshua Tree National Park. Settlers and trappers slowly began to pass through the area, ultimately driving the native tribes of the area out of the land. There are still many museums and monuments around the park honoring the tribes.[1] Spanish explorer Juan Bautista de Anza discovered Anza-Borrego Desert State Park in the early 18th century. The park's headquarters is the city of Borrego Springs, developed shortly after the park was established. The park is the largest in all of California.[7]

For thousands of years, the Salton Sea flowed into Coachella Valley, but after years of arid weather in the valley, the water slowly began to dry up.[8] The first Europeans settled in the Sheephole Valley Wilderness in the 18th century. The nearly two billion acre wilderness has since been reduced significantly by towns, commercial developments, and clearings for agricultural purposes.[9] Over half of the Joshua Tree National Park Region is undeveloped and well-preserved wilderness.[6] 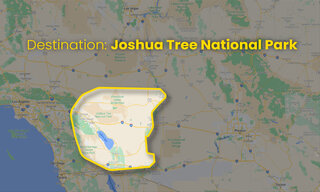