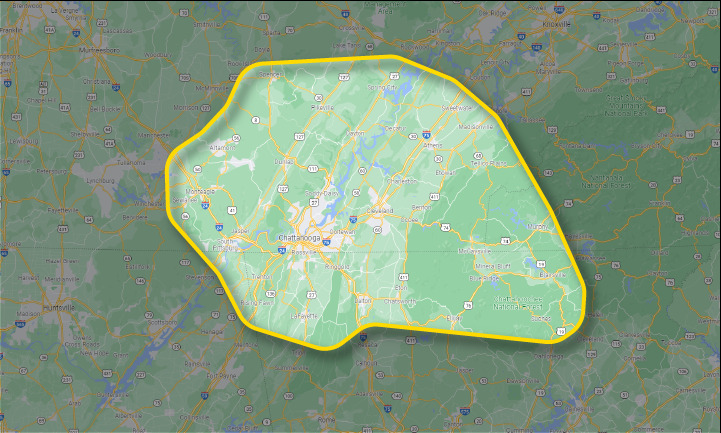 The Prentice Cooper Region is mainly located in Tennessee but it also includes parts of North Carolina, Alabama, and Georgia as well. It has mountains, lakes, rivers, fields, and cities. Some cities within the destination are Dayton, Eton, Rising Fawn, Blairsville, and Chattanooga. Possible attractions nearby include Time to Escape-The Escape Room Experience, Ruby Falls, Chattanooga Zoo, the Creative Discovery Museum, the Hunter Museum of American Art, and High Point Climbing and Fitness: Downtown.[3] Other experiences include hiking, fishing, swimming, and sightseeing. The weather in the area is the warmest from June to September, with the coldest months being in December, January, and February. It rains the most in December, March, April, June, and July. The region gets snow from December to April, with the most snowfall during January.[4]

What Prentice Cooper is known for

Cities within the Prentice Cooper Region involve Chattanooga, Dayton, Ocoee, Eton, Blairsville, and Rising Fawn. Chattanooga is a larger city located in Tennessee. Within the city are many attractions, such as the Chattanooga Zoo, Ruby Falls, the Creative Discovery Museum, High Point Climbing, Fitness: Downtown, Time to Escape-The Escape Room Experience, and the Hunter Museum of American Art. Chattanooga Zoo houses over 500 animals with 200 different species of animals, many of which are endangered. The price is $10.95 for each adult and $7.95 for each child. Ruby Falls is the tallest and deepest underground waterfall in the United States. The public are welcome to view and photograph the falls. There are also 700 feet of zip lines at Ruby Falls' High Point ZIP Adventure, a nearby attraction. The Creative Discovery Museum has a variety of interactive activities for children to participate in. There is a play area with slides and different things that children can climb. The museum has many exhibits designed to help kids learn about specific topics and cultures.[3] On average, Chattanooga gets three million visitors each year. Eighty percent of those visitors live less than three hours away, coming from nearby cities and towns. The amount of money tourists have spent over the years in the area has risen from $534 million in 2002 to today's $893 million. Around 14 million people live within 150 miles of Chattanooga.[8]

The Prentice Cooper Region is known for the national forests it houses, the two main forests being the Prentice Cooper State Forest and the Chattahoochee National Forest. Within the forests, there are many hikes and other activities available, including hunting and trapping. Also in the destination are many lakes and rivers, allowing people to go fishing, paddling, and swimming.

The Prentice Cooper Region, located in parts of Georgia, North Carolina, Alabama, and Tennessee, is covered in rivers, lakes, and cities, along with national and state forests. The destination wraps around the cities of Sweetwater, Madisonville, Murphy, Blairsville, Suches, Ellijay, Dalton, LaFayette, Rising Fawn, Sewanee, Pelham, Spencer, and Spring City. Located within the area is Chattanooga, a larger city in the state of Tennessee. Also in the surrounding landscape is the Prentice Cooper State Forest and the Chattahoochee National Forest. The landscape of the territory is relatively flat, with some hills, valleys, and fields. Mountains surround the area, and there are many trees growing within the area. The Tennessee River runs through a large portion of the region. There are also lakes such as Lake Lainer within the district.

The weather in the area has an average high of approximately 82 degrees Fahrenheit. The average low is around 40 degrees Fahrenheit. The warmest months are from June to September, with the coldest months being December and January. The highest chance of rain is in December, with other likely months being March, April, June, and July. It snows often in the region, with the highest amount falling during the month of January. Snow is usually on the ground from December to April. Perhaps the best time to visit the destination is during its warmest season, which begins in April and goes to the end of May.[4]

The Prentice Cooper Regions, like most places in the world, is home to many different species of plants and animals. Some animals within the vicinity include birds such as thrushes, warblers, tanagers, flycatchers, great-horned owls, barred owls, wood ducks, great blue herons, common loons, wild turkeys, woodpeckers, house wrens, and red-shouldered hawks. Other animals like deer, raccoons, rats and other rodents inhabit the area as well.[5] Plants in the area consist of Japanese beach ferns, smooth whites, hellebore, clematis species, paeonias, strawberry shrubs, and ajuga species.[6]

After graduating from Princeton, Prentice Cooper volunteered for service in World War I. He was inducted into the U.S. Army as a private. After training, he rose to the position of the master gunman, sergeant, and second lieutenant over time. In May of 1918, he was transferred to Fort Monroe, Virginia, after previously being in Battery E of the 307th Field Artillery. He was discharged on January 23, 1919. After serving in the war, Cooper went on to study law at Harvard University. He received an LL.B. degree in 1921. He returned to Shelbyville to open a law practice next to his father, who was a prominent lawyer and banker.

In 1923, Cooper represented Bedford County in the Tennessee House of Representatives. He was later elected the city attorney of Shelbyville. He served in the state Senate representing the Bedford, Coffee, and Moore Counties from 1937 to 1939. Cooper served as a governor from 1939 to 1945 for three consecutive terms. While he was serving, World War II was fought and won by the United States. Cooper mobilized the state for war during the time. He appointed the Tennessee State Defense Council, which was the first such council in America, in 1940. Cooper's control over the state helped greatly in the war, and many people from Tennessee served in the war.[2] Prentice Cooper's legacy lives on through the various parks and other places that are named in his honor, one of which being the Prentice Cooper Region.

The Garden Walk Bed & Breakfast Inn is located in Lookout Mountain, Georgia. It's a group of buildings that form 18 distinct units, each of which surrounds garden land in the center of the property. Every unit has many amenities available for their guests. There is a breakfast served every day in the morning. The breakfast usually includes pancakes, egg croissants, and/or peach french toast. The bed and breakfast was once a motel, and earlier than that, it was a motor court. The current owners have owned the property since the year 2001 and have tried to keep it up to date ever since.

The St. Francis Cottage was constructed in 2017 in the city of Chattanooga Tennessee. The property has seven rooms open to guests year-round. All seven of the rooms have a different design style and color theme. The building has multiple common areas inside and out, including a library and media room with a 55-inch television, a great room with a fireplace, and a rear deck that is half covered and half in the sunshine. There are other areas throughout the property that guests can walk around and enjoy, including a garden area and many different trees on the grounds. Breakfast each morning is a three-course meal with a fruit course, savory course, and a dessert. Many of the savory items are egg-based such as omelets or eggs benedict. As for desserts, many include waffles or pancakes with lemon curd.

The Battleview Bed and Breakfast is located in Fort Oglethorpe, Georgia. The historic home was built in 1904. It functioned as a cavalry home, lodging house, and family home before it was purchased by Stephanie and her husband and converted into a bed and breakfast. The home has three guest accommodations with a large front porch and living area with seating. Chickamauga National Battlefield and the 6th Cavalry Museum are located within five minutes of the home. Breakfast is served every morning at the guest's requested time. The Battleview Bed and Breakfast is open year-round with an increase of guests during the summer and fall. 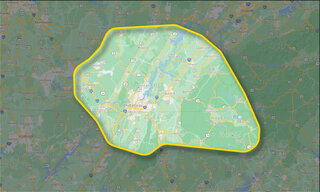