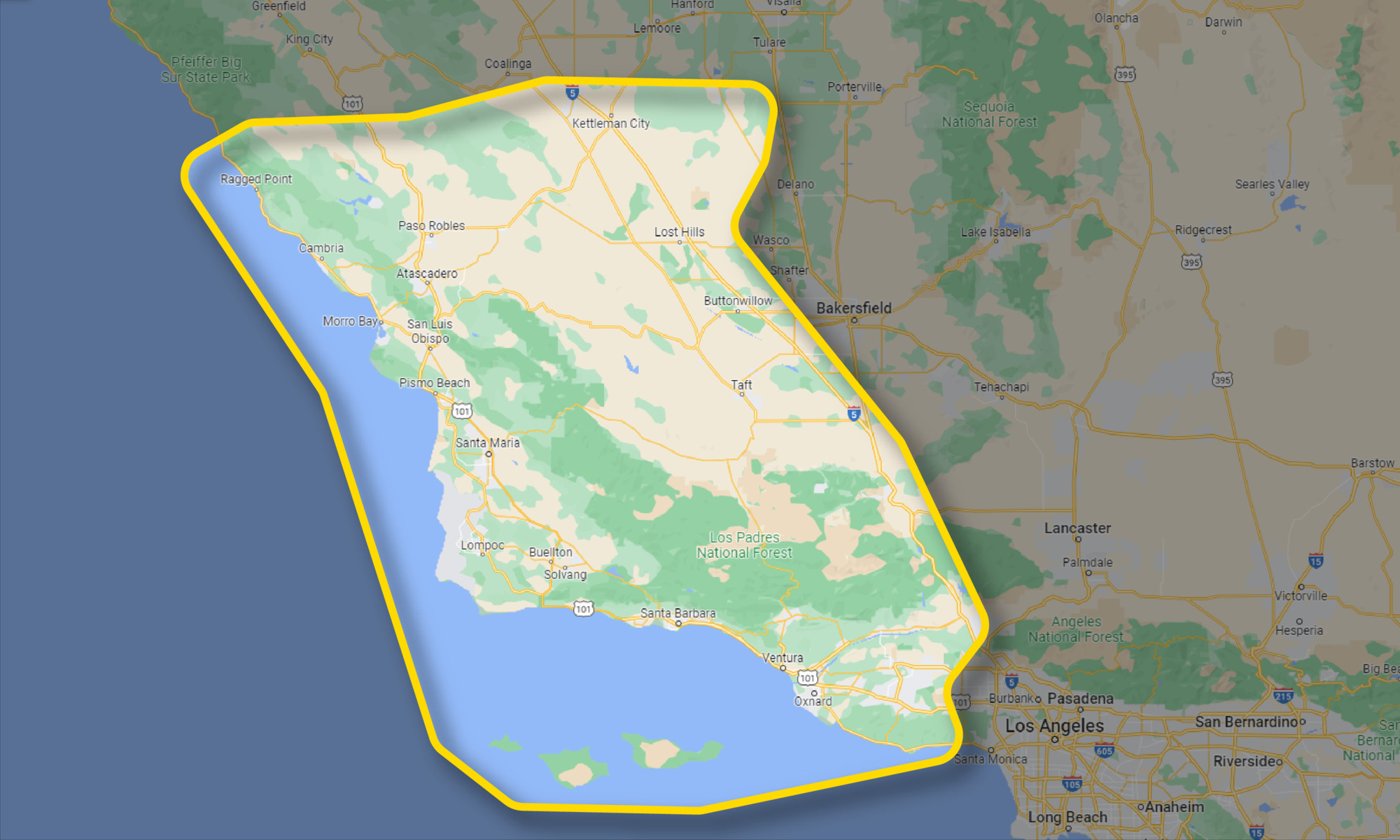 The Santa Maria Destination can be found in the Central Coast region of California, between prominent cities such as Los Angeles and San Francisco. Several beaches including Pismo State Beach, Olde Port Beach, and Rancho Guadalupe Dunes Preserve are located in the destination, in addition to the Los Padres National Forest, which covers about 1.75 million acres of land. The national forest is one particular area that draws in a number of tourists annually, especially those who take interest in outdoor recreational activities, as Los Padres National Forest is characterized by many paths for hiking and trails for off-road vehicle use.[2] From late June to late September it is considered by many to be the most ideal time of year to visit areas in the Santa Maria Destination, considering the temperate weather conditions. The average daily high temperature during the peak season of tourism typically reaches above 73 degrees Fahrenheit.[6] Regarding the economy in Santa Maria County, agriculture plays a major role in aiding the economy currently; although, when oil was discovered in 1888, the oil industry became the main support at the time.[4]

What Santa Maria is known for

Located just off the shore of the Pacific Ocean in southern California, the Santa Maria Destination is comprised of over one hundred miles of coastland. Additionally, the area is home to notable cities such as Santa Barbara, Pismo Beach, and Ventura. Santa Maria, the namesake of the destination, can be found in the southwestern area of the destination. The city's name has a somewhat unique story associated with it. The town was originally called Grangerville in honor of its first store, called the Grange. This name was later changed to Central City and would end up being a source of confusion for multiple groups. Citizens of the town were not receiving their mail as intended, and in 1885 it was discovered that much of the local postage was being rerouted to a town in Colorado that was also called Central City. This led to the city's final name, Santa Maria, in order to avoid future misrouting. An estimated 105,483 residents live in the city, 49.7% of which are male, and 50.3% are female. Santa Maria County is comprised of three communities, one of them being Santa Maria Valley, and the others being Guadalupe and the community of Orcutt. Santa Maria is located about 170 miles north of Los Angeles and nearly 270 miles south of San Francisco, both of which are a couple of California’s most prominent cities.[1] Generally, the best time of year for tourists to visit is from late June to late September as temperatures are relatively warmer.[6]

One particularly notable area located within the Santa Maria Destination is the Los Padres National Forest, encompassing approximately 1.75 million acres. Two separate sections of the national forest divide the land into the northern division, in Monterey County and northern San Luis Obispo County, and the main division of the area, which contains land within San Luis Obispo, Santa Barbara, Ventura, and Kern Counties. Additionally, the forest is divided into five administrative units, also known as “ranger districts.” There are nearly 1,257 miles of walking trails where visitors can go backpacking, plus 459 miles of trails and roads designated exclusively for off-road vehicle use.[2]

One of the main draws for tourism in the region is the beaches and the recreational activities that visitors can engage in there. Rancho Guadalupe Dunes Preserve is one specific beach, situated along the Santa Barbara County coastline, with relatively sizable sand dunes, hence the name. Animal habitats can additionally be found in the preserve, as it is located in Guadalupe-Nipomo Dunes National Wildlife Refuge. Another notable beach in the Santa Maria Destination is Avila Beach City Beach, which runs along the entire waterfront length of Avila, California. Other beaches include Olde Port Beach, Pismo State Beach, Fisherman’s Beach, and the Oso Flaco Lake Natural Area, a lake that is characterized by a creek leading into the ocean.[3]

A relatively large portion of the Santa Maria Destination is mountainous, especially in the northeastern areas of the region. A particular land feature, the Santa Maria River, serves as the border between Santa Barbara County and San Luis Obispo County. The entire western area of the Santa Maria Destination is encompassed by the Pacific Ocean, in contrast to the eastern portion that contains the San Rafael Mountains and the Los Padres National Forest. The city of Santa Maria itself has a total area of 22.4 square miles. A cool Mediterranean climate affects the destination, with mostly sunny days and some snow in the highest parts of the mountain ranges; however, snow can rarely be found in the lower elevations of the cities.[4] Summer seasons typically last a long time and are arid, while winters are colder and cloudier. Temperatures range from 41 degrees Fahrenheit to 75 degrees Fahrenheit throughout the year. Santa Maria has an average daily high temperature above 73 degrees from June to October, the “warm season.”[6]

Los Padres National Forest is one particular area in the Santa Maria Destination that contains an abundance of wildlife. Some of the animals that can be found in this area include deer, wild pigs, elk, bears, and antelope. Additionally, some of the previously-mentioned animals can be hunted with appropriate permits. Deer in the area are divided into two subspecies, the Columbian black-tailed deer and the California mule deer, both of which constitute the majority of what is considered “big game” in the national forest. Rabbits and squirrels are smaller mammals that inhabit the area, in addition to some species of birds, namely, band-tailed pigeons, doves, turkeys, and chukar. Among the non-game animals that live in the area, there are nearly 307 species of birds, 34 species of reptiles, 70 species of mammals, and 14 species of amphibians.[7]

The discovery of oil became a major event in Santa Maria's history, as it took place in 1888. In 1902, the large Orcutt Oil Field was discovered in the Solomon Hills by Union Oil, as several other smaller oil companies were also pumping oil. In the 1930s, the development of the oil industry began to rapidly progress as the discovery of the Santa Maria Valley Oil Field took place in 1934.[4] One particular event that aided in progressing the oil industry was when exploratory drilling produced a sizable gusher that was given the name “Old Maud.” This, in turn, led the oil industry to flourish for the next 80 years; however, in recent times, agriculture has become more predominant when regarding natural resources in the valley.[1] In the late 19th century, the region’s rich soil attracted farmers and settlers from various places, after California had gained statehood in 1850. This led to Santa Maria River Valley becoming one of the most successful agricultural areas in the state by the end of the 19th century. In current times, agriculture still plays a role in aiding the economy of the city and region.[4]

One of the largest communities in the Santa Maria Destination, the city of Santa Barbara, experienced a large earthquake on June 29th, 1925, destroying a sizable portion of the downtown State Street Corridor. Following the earthquake, Bernard Hoffman and Pearl Chase led a growing community movement, with the goal in mind to create a “uniform architectural style.” It was then rebuilt in a Spanish style, and the country’s first architectural review board with precise design standards was constructed. The historic district of Santa Barbara’s core is distinguishable by the white stucco walls and the roofs with red tile shingles. This particular time in history and the occurrence of the earthquake essentially brought to pass the current culture of the city and its Hispanic characteristics.[5]

Sundance Bed and Breakfast has three suites available to the public and can be found in Paso Robles, California—a few towns to the north of Santa Maria. One of the biggest draws to the area is the abundance of wineries, breweries, and distilleries located within close vicinity of the bed and breakfast. A number of popular festivals occur nearby throughout the year, culminating with a more constant event near the end of the year called Sensorio—a light festival that is spread out over about 15 acres of fields. A majority of the surrounding companies, establishments, and restaurants are heavily influenced by French and Italian culture. One highlight that the owners take pride in is the three-course breakfast they make for guests in the mornings.

Cayucos Sunset Inn, located in southern California, features nine units, as well as a dining room and lobby area for guests. The owner's wife, Lisa Mankins, designed the building and the stained glass windows featured inside some of the rooms. A full breakfast is served in the morning at the guest's chosen time. The inn's close proximity to the beach typically draws in visitors who are hoping for a relaxing getaway. The overall atmosphere of the location tends to be quieter as it is a small town area away from the more urban cities. Some of the nearby restaurants include Café Della Via, Lunata Garden Bistro, and Duckies Chowder House. Outdoor activities such as fishing or kayaking are relatively popular within the area. Several rental stores for recreational gear are near the property.

The Front Street Inn is located in Morro Bay, California, and has been in operation since the early 2000s when the owners built the edifice. There is a bakery, surf shop, a spa, and three units available for reservation within the building. The rooms and spa are located on the second floor, with the rest of the businesses being located on the bottom floor. All three units have beachfront views; the property is also just a short walk to the beach. Popular attractions in the area include said beach, as well as wine tasting, shopping, whale watching, and hiking. The establishment is open year-round, with the busiest season being during the spring and warmer months, and a slower season during the winter season. Pets and smoking are not permitted on the property in hopes to keep the rooms clean and odor-free.

The Cheshire Cat Inn, established in 1985 and located in Santa Barbara, California, is home to 22 guest accommodations split across multiple buildings. There are two main buildings on the premises, namely the Main House and Eberle House, which are of Victorian style and contain six units each. The name of the inn is inspired by the book Alice's Adventures in Wonderland, and many of the rooms' names are derived from characters in the novel, such as Tweedledum Suite and the Mad Hatter. The property is located a block away from State Street in Santa Barbara, as well as a handful of dining and entertainment attractions. The Cheshire Cat Inn is open year-round, though its busiest season is typically from May to August due to the warmer Californian weather, according to management of the property. 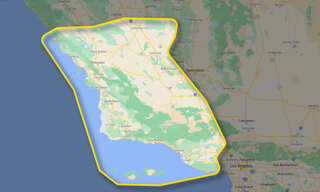