The Escondido Destination is located in the southern portion of California. The city for which the destination is most well known is San Diego. Many people travel to the city to visit attractions such as SeaWorld San Diego, the Gaslamp Quarter National Historic District in the city, and the San Diego Zoo.[4] Those who wish to see animals in a more open environment can travel to the San Diego Zoo Safari Park, located in Escondido. The area is typically warm throughout the year, with the hottest periods usually occurring between July and September.[6] Throughout the region, the geography is mostly flat with some hills and mountains to the east. Palomar Mountain is the most prominent mountain in the area and tourists can visit the Palomar Observatory and Hale Telescope at the top to receive tours. On the west side of the destination are a variety of beaches that people can explore. Some of these beaches include the Sunset Cliffs with a number of small caves and cavities in the rock along the coast that provides places to watch the ocean and the sunset.

What Escondido is known for

The word ‘Escondido,’ the namesake of both Escondido, California, and the Escondido Destination, means ‘hidden’ in Spanish. The city is located 15 miles from the ocean and 30 miles from the largest city within the Escondido Destination: San Diego. Many tourists travel to San Diego to experience a variety of attractions throughout the city. One of its most notable locations is the San Diego Zoo, which is one of the largest and most well-known zoos in the United States. The San Diego Zoo is home to over 700,000 plants, which qualifies the property as a botanical garden,[7] and a wide variety of animals such as polar bears, leopards, and koalas, among others. Many visitors to the zoo also travel to the San Diego Zoo Safari Park, located in Escondido, to observe other animals in a more open environment.[4]

San Diego’s economy is influenced by many different industries, with some of the most notable being defense, research, and manufacturing. With regards to defense, San Diego has the highest concentration of military assets in the world and it employs the largest military workforce in the United States.[8] The U.S.S Midway, a former aircraft carrier for the United States Navy, is now used as the Midway Aircraft Carrier Museum. People who may be interested in military history can visit the museum to learn more about how the aircraft operated and some of the notable battles it took part in. Other popular attractions among tourists include the Gaslamp Quarter National Historic District near the city’s downtown area, the San Diego Museum of Art, and SeaWorld San Diego.[4]

The city of Escondido is one of the oldest cities in San Diego County, having been incorporated in 1888.[1] Throughout the town, there are a number of different locations where visitors can learn more about the region’s history. The Escondido History Center, located in the historic downtown area, displays various artifacts from the town’s history and offers live blacksmithing demonstrations in the Brandy Blacksmith shop on the premises. East of the city is the San Pasqual Battlefield State Historic Park which commemorates a battle that took place at the location during the Mexican-American War. There are a number of parks that offer space for outdoor activities, one of the most popular being Dixon Lake. The lake is a main source of freshwater for Escondido and it provides tourists with picnic areas, walking trails, and lake access as well as boat rentals. North of the city, Lake Elsinore offers an alternative location for lake activities.[3]

Throughout the Escondido Destination, the climate is mostly temperate. It is for this reason that many people will travel to the region as the temperature remains consistent for the vast majority of the year. With that being said, there are still periods that are warmer than others. Usually, this increase occurs around the end of August to early September with an average temperature of about 80 degrees Fahrenheit. There are also periods of cooler weather but the average temperature rarely falls below about 55 degrees Fahrenheit. Typically, the best time of year to visit the region is between March and November, based on the moderate average temperature and the lower levels of rain that one might experience.[6]

On the whole, the region is fairly flat with mountains to the east of the destination’s boundary. Palomar Mountain State Park is a notable geographic location, containing Palomar Mountain and much of the forest surrounding it. At the summit of the mountain, one can find the Palomar Observatory and Hale Telescope, which are open to the public for self-guided tours of the facility. South of the state park is Cleveland National Forest with more hills and low mountains. Visitors to both parks will find some trees with a large number of bushes and shrubs. Most of the area becomes more developed and urban towards the coast, especially as one approaches San Diego.

One of the most popular geographic aspects of the Escondido Destination is the beaches that line the Pacific Coast. Mission Beach in San Diego is one such beach that many people visit during a trip to the area. In addition to the beach itself, those at Mission Beach can also visit Belmont Park, an amusement park with a number of different rides and entertainment such as the Giant Dipper Roller Coaster and the Tiki Town Adventure golf course. Slightly further south, there are the Sunset Cliffs and many different caves that tourists can visit and explore.[9]

The Escondido Valley was originally settled by the Luiseño and Kumeyaay people, however, the land would be claimed by Spain in the late 18th century. Catholic missions were established by the Spanish in the valley in an attempt to convert the native people. These missions would stay in the area until the Mexican-American War in the 1840s. One battle of the war, the Battle of San Pasqual, was fought south of Escondido. Today, the San Pasqual Battlefield State Historic Park commemorates the battle that was fought and provides visitors with additional information about the two sides who fought there. Following the Mexican-American War and the acquisition of the California territory by the United States, many American farmers traveled to the area to set up farms.[1]

The area continued to grow from 1850 to 1888 when the region was finally incorporated into the city of Escondido. Following the city’s creation agriculture remained a large part of the community with one of the most important crops grown in the valley being grapes. Starting in 1908 and going until 1950, an annual Grape Day was held where free grapes were distributed to the local citizens in celebration of the town paying off a large amount of irrigation tax. Other crops that were planted in the region include lemons, avocados, and hay.[5]

One of the most prominent aspects of the Escondido Destination’s history is the large effect that the United States Military has had on it. The U.S. Navy established a base there in the early 1900s and for much of World Wars I and II San Diego was a major location of defense manufacturing and military installations. In the years after World War II, this military presence remained a large part of the city’s economy and is still a large part of the city’s economy today, however it was reduced after the Cold War. Following the reduction in defense work, the tourism and research industries grew in San Diego and have become the other main aspects of the city’s main exports.[2]

Just off the coast of Carlsbad, California, two blocks away from the beach, sits an inn called the Pelican Cove Inn. The inn has ten guest accommodations and a separate eleven-person home to house guests. Because of their extensive room options and the house, the Pelican Cove Inn can accommodate larger groups. Breakfast is served each morning and includes dishes such as pancakes, french toast, and quiches. Because of its proximity to everything in Carlsbad, the Pelican Cove Inn is perhaps a convenient place for guests to stay who are coming to vacation in the area. Carlsbad is a tourist city less than an hour's drive from San Diego and Disneyland. It is also the home of the LEGOLAND amusement park. Guests often enjoy visiting the Pelican Cove Inn because it is excluded enough to feel private while also being close to the major attractions nearby.

The Tucker Peak Lodge is an inn with six rooms located in the mountainous hills of Julian, California, east of San Diego. The town of Julian has been around since the 1870s and is best known for its locally grown apple, used for making pies and ciders. The Tucker Peak Lodge aims to help guests feel relaxed and get away from the city. The owners strive to create an atmosphere that is different from chain hotels in as many ways as possible. The air of relaxation and serenity are some of the features of the property that are most commonly mentioned in guest reviews. The lodge is open year-round with an increase of guests during the spring and fall. This increase is due to the many people participating in the Pacific Crest Trail or visiting for apple harvesting season. 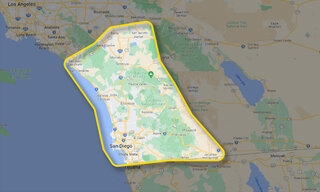