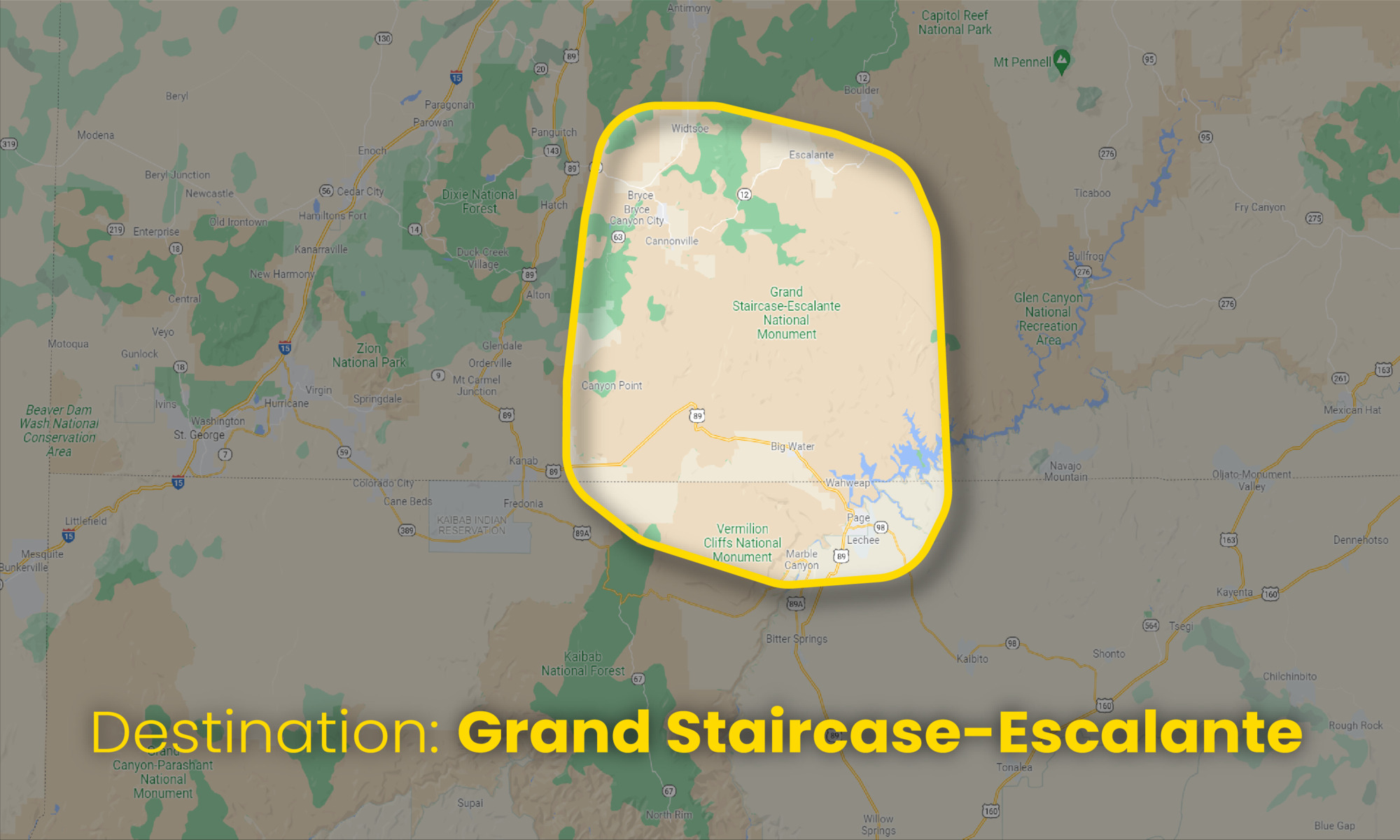 The Grand Staircase-Escalante Region encompasses the entire valley between the Dixie National Forest, Bryce Canyon National Park and ends just shy of Capitol Reef National Park. Each park has unique features with rolling prairie land, desert plains, and lush wood forests. The wildlife through the area is abundant, and there are many different monuments and geological wonders throughout the territory. The Grand-Staircase National Monument is not only the namesake of the destination, but also covers the most extensive section of the area. The monument is filled with monoliths, slot canyons, and other geological wonders.[1] Bryce Canyon, as well as the Dixie National Forest area, are also filled with hiking trails, forests, and natural arches.[2] The region only contains a few cities and towns; these include Connonville, Panguitch, and Escalante.

What Grand Staircase-Escalante is known for

This territory includes a national park, national monument, and a national forest. Because of this, there are many geographical wonders throughout the area. Visitors primarily come to explore each of the nationally-known areas and attractions. The destination has many different landscapes and wildlife areas. These include a low lying desert, coniferous forest, and red rock covered land.[8] When visiting the Grand Staircase-Escalante National Monument, they can enjoy scenic drives and hike to the top of the monument's many plateaus. There are many popular hikes and camping grounds throughout the memorial. The hiking trails lead to waterfalls, natural bridges, and arches. Slot canyons and monoliths are also a popular activity among visitors.[1]

The Dixie National Forest lines the southern half of the region. The forest is filled with a wide variety of plant and animal life. The park has over two million acres of land and divides the Great Basin and Colorado River.[3] Visitors can go fishing in lakes and ponds throughout the forest, hike the forest peaks, and observe wildlife. Just next to the Dixie National Forest is the Bryce Canyon National Park. This park is among the top five most popular national parks in Utah and the nation. The park is known for the hundreds of hoodoos, big and small, spread throughout the park. Hoodoos are thin rocky formations that protrude from the rock in spire formations. Additionally, within the national park visitors can ride horseback, rock climb, and fish.[4] Grand Staircase-Escalante National Monument was among the last places in the continental United States to be mapped and still has many uncharted areas, unlike other parks and forests in the area.[1]

The most popular time for tourist visits are during the summer months. April through September is the warmest time of the month, and during those months, over sixty percent of the park and monument's guests visit the park. During the fall months, temperatures drop, but the Dixie National Forest still sustains many guests due to its changing landscape and active wildlife.[6] Guests who spend time in the destination during the winter months often go on snowmobiling tours, snow showing exhibitions, and enjoy winter sports. The area supports over three million visitors annually. Visitors come from all around the United States, though they most commonly come from California, Idaho, Washington, Colorado, Nevada, and Arizona. Utah residents also spend a lot of time in the Grand Staircase-Escalante Region.[2]

Visitors often spend time in the city of Escalante and Panguitch. Here they can enjoy local activities, including spending time at aquariums, movie theatres, and museums. There are also many children's parks and grassy commons throughout the cities for kids and family. The peak for business throughout the region comes with the rise in tourism. Most of the cities throughout the area rely on visitors to sustain their businesses. There are numerous hotels, campgrounds, and RV parks throughout the valley between the destination's attractions. Almost three-fourths of the destination is nationally owned, so there are not many areas where agricultural plants are produced. However, locals will often plant gardens and grow wheat, alfalfa, and plant orchards to grow food for themselves and their animals during the summer and fall.[8]

The area runs between the Great Basin and the Colorado River. The landscape features extensive forests, desert hills, and sprawling prairie lands.[8] The warmest and most popular time to visit the Grand Staircase-Escalante Region is during mid-July. The temperature peaks at around ninety degrees Fahrenheit. The coldest time of the year is during the months of December and January, with an average temperature of seventeen degrees. The weather throughout the territory often changes with warm days and cold nights. The destination receives anywhere between eleven and forty inches of rainfall annually and around twenty-nine inches of snow every year.[6]

Because of the varying landscapes throughout the area, there is a wide variety of plant and animal life. Most commonly, visitors will see mule deer, bighorn sheep, cougars, mountain lions, cottontail rabbits, and coyotes.[7] Most of the plants throughout the destination are harsh weather plants meant to endure Utah's weather changes. These may include tree cacti, sagebrush, orchids, willows, and cottonwoods.[8]

The Paiutes initially inhabited the region. The tribe lived off the land exclusively until the first white settlers came to the area in 1866. The discovery of the Grand Staircase-Escalante National Monument was an accident when settlers took the wrong path through the valley. In 1996 the space was officially established.[1] Bryce Canyon became a park in 1923 and was discovered by J.W. Powell when he came across the horseshoe-shaped amphitheaters after discovering the Colorado River and Lake Powell.[2] The Dixie National Forest was established in 1851 when Brigham Young sent settlers to the area.[3]

The Indians who first inhabited the land left behind a wide variety of artifacts and more. These things may include pictographs, petroglyphs, and even their own personal dwellings. The city of Panguitch was established in 1864 by Mormon settlers who farmed the area. Timber and Livestock industries flourished till WWI, when the resources in the area were exhausted.[5] Escalante was established in 1776, and ranching was the land's primary use within the city and its borders. Ruby's Inn was built some years before Bryce Canyon National Park was established and was the start of the construction of Route 63, which is now the main highway throughout the region.[9]

The Slot Canyon Inn Bed and Breakfast is located five miles from Escalante, Utah. The inn resides on 160 acres of land and backs up the Grand Staircase Escalante National Monument. There are eleven spaces available for rent, all with private bathrooms, entrances, and jacuzzi bathtubs. Some rooms have small kitchenettes and can sleep up to six individuals. Complimentary breakfast is served daily, and an on-site restaurant serves lunch and dinner. A few yards from the inn is a cliff covered in Native American petroglyphs and pioneer graffiti. The property is open year-round with a soft close during the winter months.

The Grandview Inn is located in Page, Arizona, and is only 10 minutes from Lake Powell. The property contains three units for guests to choose from, as well as the ability to rent out the entire house for a night's stay. The surrounding area is a desert climate with distinct red rocks which are famous in the southern Utah landscape. Activities such as boating and fishing are possible by means of nearby lakes and rivers. Breakfast is served at the Grandview Inn each morning, including items such as omelets, croissant breakfast sandwiches, and quinoa bowls.

The Wild West Retreat is located in Escalante, Utah. The retreat has two guest accommodations. Their accommodations include a restored historic barn and a renovated farmhouse. Each lodging option has a full kitchen, living spaces, covered porches, and outdoor seating. The two-acre property has a large fruit tree orchard and vegetable garden that guests are welcome to pick from. Many weddings, corporate retreats, and adventure groups stay at the Wild West Retreat and use the adjoining Cowboy Cookouts catering business to make their meals during their stay. The retreat is located just minutes away from the Grand Staircase Escalante National Monument, Bryce Canyon National Park, and Capitol Reef National Park. Wild West Retreat is open year-round.

The Buffalo Sage Bed & Breakfast is located in Tropic, Utah, which is about six miles outside of Bryce Canyon National Park. The Buffalo Sage Bed & Breakfast has only two guest rooms available to the public for visitors to choose. The park is a large draw for visitors, in addition to the unpolluted night sky and the other red-rock formations of southern Utah. While the city of Tropic is smaller in comparison to others, the owner says that the main reason guests visit is to find a good view of the outdoors and wildlife. The bed and breakfast has been functional for 20 years, under the management of Alice and David Roberts.

Canyon Colors Bed and Breakfast at Lake Powell is located in Page, Arizona, six miles away from Lake Powell's shore. The bed and breakfast has four rooms for their guests to choose from, all of which having a variety of amenities. The property is pet-friendly and also encourages families to come and stay. There is a patio in the backyard of the building that can be used for a variety of activities, such as barbecuing, relaxing, or reading. Canyon Colors Bed and Breakfast is located 6 miles away from Lake Powell, which can provide a convenient lodging location for guests who may want to visit the lake.

Bryce Trails Bed and Breakfast is a place of lodging that can be found near Bryce Canyon National Park and on the edge of the city of Tropic, Utah. There are a total of six rooms available. Many people who reserve a room at the bed and breakfast are in the area for activities such as exploring Bryce Canyon, hiking some of the many trails in the vicinity, and riding ATVs around the outskirts of the town. Bryce Trails Bed and Breakfast is open year-round and, according to the owner, some of the best times to visit Tropic, Utah, are during the spring and fall, specifically around the months of May and September. The owner is also a landscape photographer and offers an online package where he can give guests a one-on-one lesson in photography. 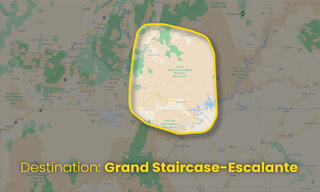